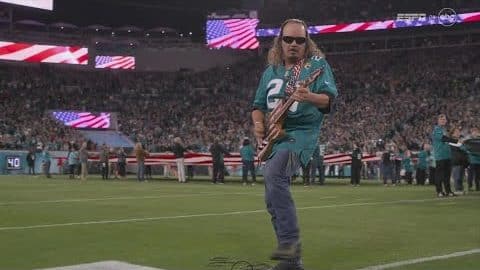 The man who played the National Anthem using an electric guitar during the National Football League in Jacksonville, Florida became viral.

The Jacksonville man who played the National Anthem using an electric guitar during the Jacksonville Jaguars vs. Tennessee Titans game was identified as Paul Wane of Duval County Line. The guitarist who was also seen on national television last Saturday night killed his solo performance of the “Star Spangled Banner” before the game.

Minutes after his performance, it immediately went viral on social media and was flooded with comments praising the performer. Some of these comments include:

“It doesn’t get more Jacksonville than that. He rocked a mullet, wearing wraparound sunglasses, a Jags jersey, and playing a guitar painted with the US flag and a red, white and blue guitar strap. What screams DUUUVAL more than that?”

Meanwhile, Wane also expressed his thoughts about it saying:

“It is probably one of the most intense feelings I’ve ever had while performing.”

Although he started playing the guitar and performing live at an early age, still for Wane “this one is big.” When he was asked how he feels about it, he was honest by saying that it was pretty overwhelming but it feels fantastic and surreal. Watch his performance below.