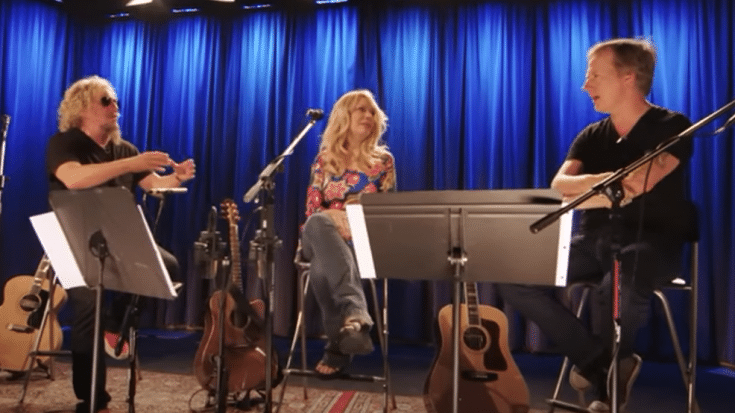 In Rock and Roll Road Trip episode, Sammy Hagar gave a quick tour inside the Grammy Museum. He was then accompanied by Kevin Cronin of REO Speedwagon.

Cronin came all the way from Illinois to join Hagar at the Grammy Museum, which is situated in Downton, Los Angeles. The two icons were welcomed by Kate Stubner, the Senior Manager of Education at the Museum. Hagar pulled a joke at her saying that she looks like Taylor Swift.

Stubner shared that the goal of the museum is to teach the history of music as interactive as possible. For her, the best way to learn is to come there with an open mind and explore all kinds of genres. Stubner guided the two rockers in different areas of the museum like the floor where the Grammy awards timeline was placed. After that, Hagar thanked Cronin for coming along with him.

The next thing Hagar did was he introduced his fellow musicians who joined him for a short jamming session. He introduced them by saying that he will be “sitting down with two Veterans of the Seattle music scene. Legendary music rockers Nancy Wilson from Heart and Jerry Cantrell of Alice in Chains.” He added:

“The first early rock bands out of Seattle, Heart was one of the first bands that really made it internationally. Kind of put Seattle on the map as a ‘Rock and Roll town.’ What was happening up there before that? With like who were you guys listening to?”

Wilson was first to answer saying:

“We’re listening to, you know, the hit. The Top 50 radio stations at the time and when The Beatles came to play in Seattle in 66, it was just like the biggest countdown in the universe. It was all the community spirit of a not a very big town.

“Seattle comes by rock music very honestly. It’s like a Port Town, it’s like the Liverpool of the Northwest.”

“Yeah, I agree 100 percent. It was just a funny thing that when you guys, Heart, you know, you guys are like ‘my kind of error.’ Where I was trying to make it, so I was watching you guys really close, and you know I mean like listening on the radio ‘Oh they got another hit. Oh, that sounds good I should you know have that drum sound’ all that kind of stuff.”

“But Jerry, when Nate, when Heart was really hitting big up there, what were you doing during that time?”

“Well, most probably I was just trying to figure out that this is something that I wanted to do. There’s always been a big community for all sorts of art and creative people in the Northwest, you know.

“But particularly in rock and roll which is what we what I aspire to be. ‘I wanted to be in a band’ and we had some local folks that did it well.”

When Cantrell was asked if they tried to be like Heart during that time, he said that everybody starts out emulating their heroes and everybody does it. “There’s definitely some Heart tunes I learned for sure,” he justified. Wilson also mentioned that as soon as Nirvana and Alice in Chains emerged from Seattle, “the whole 80s thing was completely doomed in no time at all.” Cantrell recalled:

“The thing that happened in Seattle, the history of it, you know there’s different waves. One crashes when another one starts to swell up. We were part of that and to see that happen in our town with so many other musicians that were great, and have that happen at the same time, it was really rare.”

The conversation ended by sharing each and everyone’s story about being in the same industry together. They all agreed and admitted that they felt nervous being in the same place before. However, as things started growing and years passed by, they started becoming friends with one another and kept the respect that they had both given from the very beginning.

Before performing the song “Brother,” Cantrell shared a bit of its back story. He said that he wrote it for his brother when they were young, their parents split up, and they kind of parted ways. Check out the full episode below.