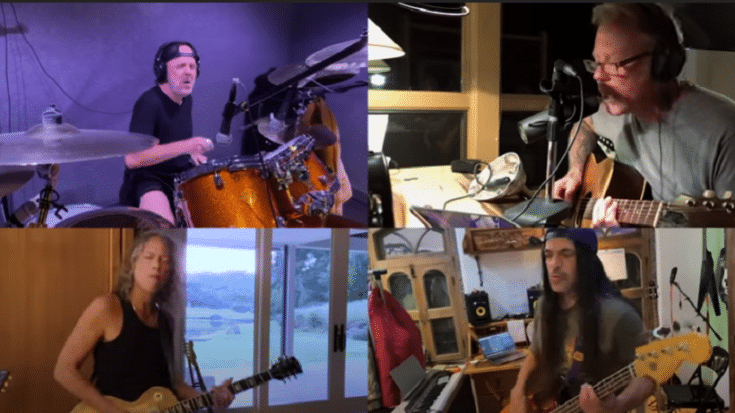 Just like other bands, Metallica had to postpone their tour this year and they were also slated to headline a couple of festivals – all of which were canceled. And so for those who are bummed that they won’t get to see this legendary rock act perform live, here’s the next best thing.

They just dropped a lockdown version of their 1988 track “Blackened” while, of course, still maintaining social distance. Performing in their own homes, James Hetfield, Lars Ulrich, Kirk Hammett and Robert Trujillo virtually performed a stripped down rendition of this classic.

They wrote about the video, “Here’s a little something we cooked up over the last few days. Hope you’re all safe & sound. Have a great weekend.”

Ulrich recently appeared on Salesforce’s livestreamed interview and he said, “So, will there be a METALLICA quarantine record? I can’t tell you, because, again, I don’t know how long the quarantine will last. But if you and I and the rest of the world are sitting here six months from now or a year from now, I’d say there’s a very good chance.”

Aside from donations, they keep their fans entertained with the online concert series titled “Metallica Mondays.”