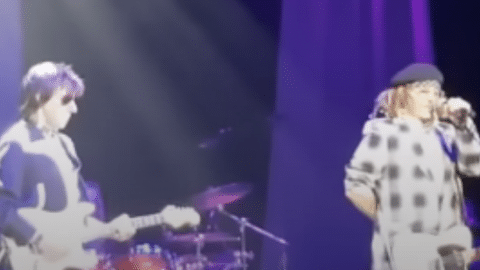 As Johnny Depp awaits for the results of his defamation trial against his ex-wife Amber Heard, the actor hit the stage with Jeff Beck and rock out in Sheffield, UK on Sunday night.

Depp and Beck performed three cover songs, including John Lennon’s “Isolation,” which they previously released as a studio recording in 2020, Marvin Gaye’s “What’s Going On” and Jimi Hendrix’s “Little Wing.”

Though, Depp appears to be cool and composed on stage, he is no doubt eagerly awaiting the verdict of his aforementioned defamation trial against Heard. After a six-week trial and after closing arguments were heard on Friday, the jury finished a second day of deliberations without reaching a verdict on May 31.

The multi-million-dollar defamation case is still currently in jury deliberation, with a decision expected to be released soon.

While Depp is best known for acting, he is also a guitarist with Hollywood Vampires, a band formed by him, Alice Cooper and Joe Perry in 2012. The name came from a celebrity drinking club formed by Cooper in the 1970s, which was linked with John Lennon, Ringo Starr, Keith Moon, and Harry Nilsson.

Watch some of the fans-captured footage of Depp and Beck rocking out live on the stage below.