Watch Guns n’ Roses’ Remastered “You Could Be Mine” 1991 Performance 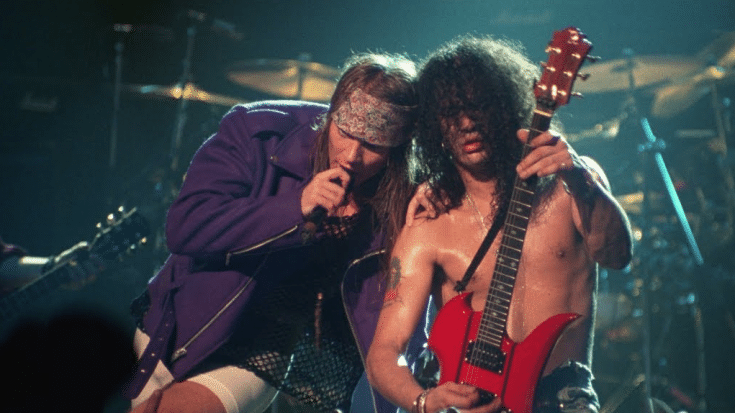 A new music video for “You Could Be Mine” has been released online. The recording was initially taken during Guns N’ Roses‘ 1991 live performance at the Ritz Theatre in New York.

Originally released in 1991, this first single from the Use Your Illusion album was used in the blockbuster action film Terminator 2: Judgment Day. The video is loaded with quick cuts from throughout the concert and highlighted several outfit changes from Axl Rose, who variously sports a cowboy hat and fishnet shirt and American flag tights.

There’s also a clip of Slash introducing the song during then-new drummer Matt Sorum’s opening fills. Lastly, it contains several clips of co-founding and guitarist Izzy Stradlin, who quit the band in November 1991 amidst the massive Use Your Illusion Tour.

The video ended even before Rose revealed that he broke his foot because he jumped off a speaker. Rose can be heard saying:

“Have you ever heard the expression ‘break a leg?’

This coming November 11, Guns N’ Roses’ is due to release Use Your Illusion I & II box set. A collection that features a total of their 97 tracks (63 of which are previously unreleased) and a complete audio from different live performances of the band. Watch the newly-released video below.