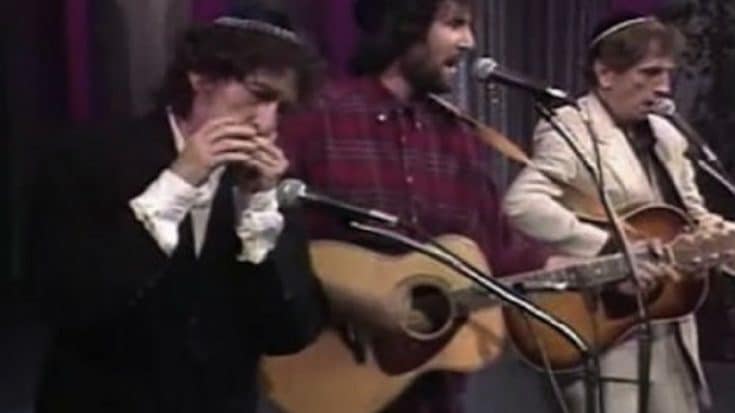 On September 24, 1989, Bob Dylan joined his son-in-law Peter Himmelman and Harry Dean Stanton on stage to perform “Hava Nagila” during the 25th annual Chabad telethon in Los Angeles. Both Himmelman and Stanton sang and played their guitars while Dylan was on harmonica.

The Israeli folk song “Hava Nagila” is traditionally sung at Jewish celebrations such as weddings and mitzvah. Composed in 1918, it was first performed in Jerusalem at a mixed choir concert. Check out the performance below.

More recently, Bob Dylan’s rare, archival and limited-edition drawings, paintings and sketches are currently on display at the Halcyon Gallery in London. This new exhibition is called Bob Dylan Editions and will run through January 31, 2021. He said via Forbes, “I was just drawing whatever I felt like drawing, whenever I felt like doing it. The idea was always to do it without affectation or self-reference, to provide some kind of panoramic view of the world as I was seeing it at the time.”

A few days ago, he also sold his entire songwriting catalog rights to Universal Music Publishing Group. The mega deal worth more than $300m includes 600 songs – one of which is the masterpiece “Blowin’ in the Wind”.