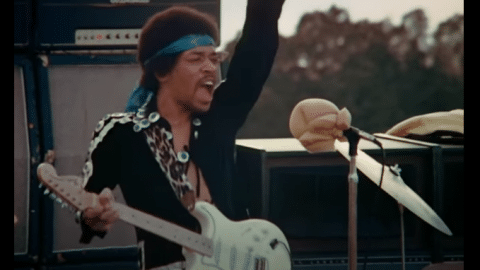 In July 1970, Jimi Hendrix powered through his two sets in Hawaii like a man possessed. It would become his final performances in the US before his tragic death on September 18 of the same year. He performed at an outdoor concert near the Haleakala Crater.

Interestingly, these were not scheduled stops but for a 1971 film by Chuck Wein titled “Rainbow Bridge” which focused mainly on the late 1960s counterculture movement. 50 minutes were shot but the final version cut most of Hendrix’s set, showing only 17 minutes of the show. On November 20, 2020, it will finally be released in its entirety.

The deluxe package will be available on CD, Blu-Ray, and LP. Check out a clip of “Voodoo Child” below as Hendrix fully displayed all his axeslinging prowess along with Billy Cox and Mitch Mitchell. It’s newly restored and mixed by longtime Jimi Hendrix engineer Eddie Kramer.

A new documentary “Music, Money, Madness… Jimi Hendrix in Maui” is also coming out on the same day and it chronicles Hendrix’s visit to Maui. It also includes previously unreleased original footage and new interviews.