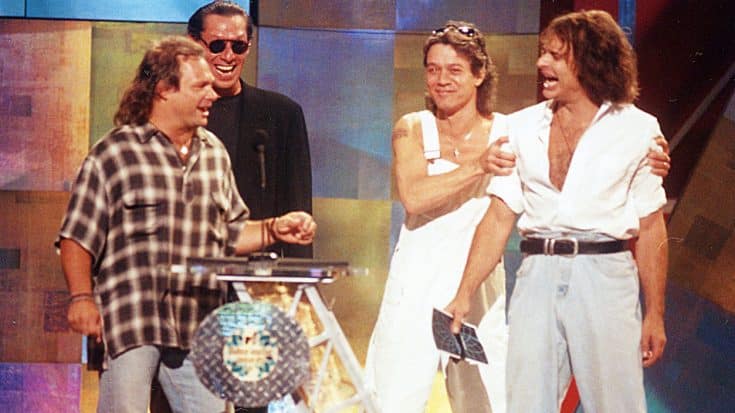 Long before we all developed a collective hatred for Kanye West after his shenanigans at the 2009 MTV Video Music Awards, we sat and stared in horror as another household name self-destructed before our very eyes during MTV’s big night: David Lee Roth and by extension, Van Halen as a whole.

In 1996, Van Halen parted ways with singer Sammy Hagar over a dispute stemming from the Twister soundtrack and as a result, brought back former singer David Lee Roth to record a few songs for an upcoming compilation album, once again rounding out their classic lineup of Van Halen brothers Alex and Eddie and Michael Anthony. The quartet made a surprise appearance at that year’s MTV Video Music Awards where they were tapped to present the award for Best Male Video…and that’s where things went downhill.

As you can see in the video if you weren’t lucky enough to catch the meltdown the first time around, Diamond Dave is a loose cannon, doing all he can to soak up attention and even taking away from winner Beck’s big moment visibly making his bandmates uncomfortable and in the case of Eddie Van Halen, irate.

However, the real fireworks occurred behind the scenes at a press conference that very nearly erupted into a physical situation between Eddie and Dave, effectively ending Van Halen’s first run at a reunion with Diamond Dave.

Sure, they’re friendly these days – hell, they even made it through an entire tour in 2015 without self destructing! As we’ve learned from their appearance at the 1996 MTV Video Music Awards, however, never take any moments of peace within Van Halen as an indicator of what to expect from them in the future!