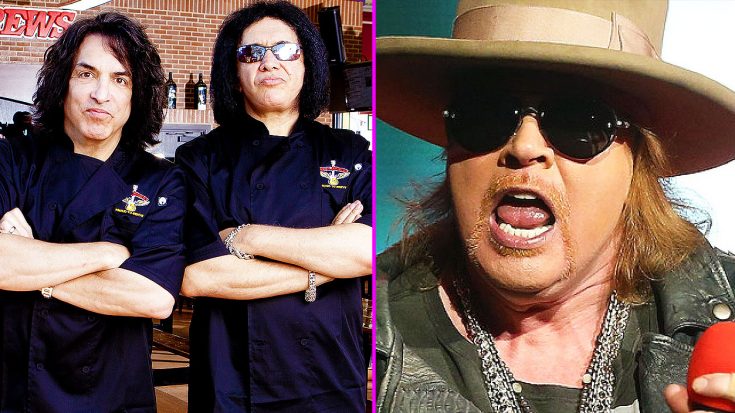 One thing we can respect about KISS is that, for the most part, the band has remained in tact. Other than a few departures here and there, the main core of Paul Stanley and Gene Simmons has remained solid, and has never crumbled.

Recently, Paul and Gene were asked about how they are able to maintain a healthy relationship as friends and bandmates. Instead of giving a generic answer, the band decided to take a few shots at Guns N’ Roses frontman Axl Rose.

“You understand that despite it all we both share a great work ethic, we show up on time and do the work and we never ‘Axl Rose‘ our way out of anything. I think the same way a ‘Kardashian’ became a 72-day long time reference, I think Axl deserves that thing that could become a verb, ‘Don’t Axl your way out of this thing.’ I think that’s appropriate.”– Simmons said.

The two were referring to Axl’s past antics and drama overshadowing the band’s performance, and thus causing tension between members. Pretty bold of the two to take a jab at Axl like that. Hopefully Axl brushes it off and we don’t see a full blown feud out of this!