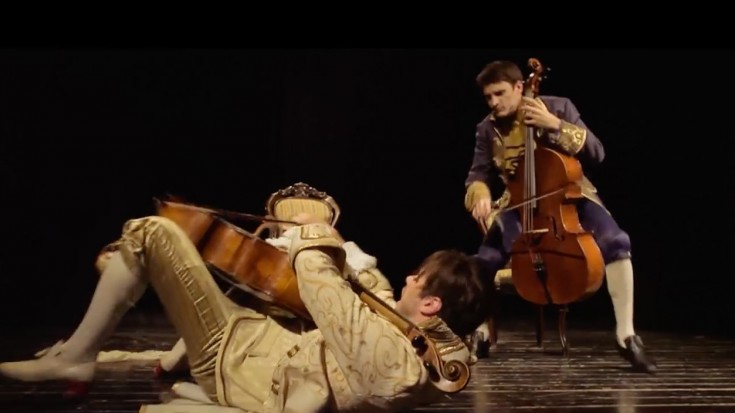 Honestly, this video takes our breath away every single time we see it. The professional videography is not what makes us gasp, although it is nicely done, but watching these two men absolutely annihilate ACDC’s “Thunderstruck” is the coolest thing you will ever see!

“In the middle of a railroad track I looked round and I knew there was no turning back. My mind raced…”

We can tell that these gentlemen are professionals, watching them strip their instruments of their strings without even flinching or considering how unconventional it is to do.

Interesting Fact: In 2004, an Australian movie called Thunderstruck was released. It’s a comedy about five guys who go to an AC/DC show in 1991 and agree to bury the first one who dies next to Bon Scott.

We have seen several different renditions of this iconic heavy metal song, but this definitely takes the cake. These dudes ROCK!!!

And somehow, they made playing the cello look easy when it’s not. Besides, who would have though this instrument would suit an AC/DC classic? We never thought it’s even possible but they absolutely slayed it. It’s crazy how they managed to fuse classical and rock – only musical geniuses can ever come up with such an idea.

Their unique covers propelled them towards international stardom. They appeared in several talk shows and even collaborated with iconic musicians like Steve Vai.

“It’s unreal. We are classically trained. We … discovered there was this rock animal inside of us … that wanted to explode.” – Stjepan Hauser

Even rock legends shared their cover versions like Guns ‘n Roses. That’s kind of a big deal, to be honest. It’s one thing for someone to like their rendition and another if they managed to impress the original artist/s. They’re taking over the world one song at a time.