Top 10 Most Underrated Classic Rock Drummers Of All Time! 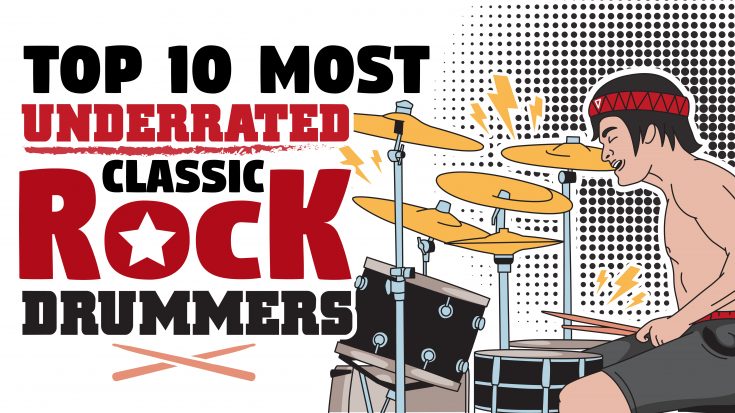 The Star Behind Hots For A Teacher!

When you think of legendary rock band Van Halen, what is the first thing you picture in your head? You probably would’ve guessed Eddie Van Halen playing eruption or David Lee Roth doing his usual flamboyant shtick, but a lot of people may not think of the leader of the pack known to be Alex Van Halen. And by leader of the pack I ACTUALLY mean leader of the pack. He’s the leader… Like, he tells them what to do, but anyway…

Alex Van Halen is truly underrated for his exceptional drum ability and knowledge on how to coordinate one of the biggest bands there ever was. He has influenced drummers and percussionists alike with his wicked fast and intricate playing. He and his brother Eddie have truly molded the shape of all rock bands to follow!

The question you may be asking yourself is why is he rarely given the recognition he deserves? Well, honestly, he likes to keep it that way. He is one of those guys who prefers to be in the background and lead from behind the scenes, but if you listen to his playing, you’ll hear the exact opposite. He is one of the greatest ever!

The Man Who Plays With Sweet Emotion!

Aerosmith has been regarded as one of the best rhythmically charged rock bands of our generation. They have set the bar when it comes to writing the most recited rock anthems of all time. You find that an ongoing theme in this list is that the bands that these drummers are associated with typically have members that overshadow other members of the band. In this case, with Steven Tyler and Joe Perry being as media heavy as they are, it was always kind of hard for this fine drummer to really get the credit he was due. Of course, not that Steven and Joe aren’t deserving, but we’re talking about drummers here. Get with the program!

Joey Kramer’s contribution to all things music makes him one of the best all around; that IS the best without all the credit he deserves.

From Children’s TV To Woodstock!

Mitch Mitchell, or as YOU might know him Jimi Hendrix‘s drummer, is regarded as one of the most humble yet innovative drummers of the flower power era. He has been so immensely influential and surprisingly technical for drummers in that particular time period.

Fun Fact: Mitch actually started his career at an early age as a child star in the film Bottoms Up. Even though Mitch never continued to pursue an acting career, this is essentially where he would get his start. After starring the film, Mitch was sent on the right path to superstardom. He eventually took up drumming and the rest is history!

Now you’ve probably guessed by now why exactly Mitch Mitchell never really got off the ground with his drumming. After the tragic and premature death of Jimi Hendrix, the band basically dissipated, and understandably so. Without Jimi, the leader of the band known as The Jimi Hendrix Experience, it’s kind of hard to continue on, and unfortunately, that did affect Mitch‘s momentum.

The Iron Man Of The Drum Kit!

To put it a simple terms, Bill Ward of Black Sabbath was part of the band that created heavy metal (yes that’s debatable). He held the fort down for what would be one of the most influential bands of the millennium. He was more so just a victim of unfortunate circumstances. He has had many health issues and personal issues that have ultimately hindered his momentum.

Bill Ward now has his own band called Day Of Errors. They are an independent band that is located on the Sunset Strip.

While Bill Ward is the victim of unfortunate circumstances, he is still beloved and respected by all fans of heavy metal and regards him as one of the founding fathers of heavy metal (again, yes it’s debatable). It’s just really his drumming that is underrated. Though it’s pretty unclear if he wanted to have it that way. After all, it’s a drummer’s job to be the foundation of the band, and he certainly was!

His Drumming Will Rock You!

Sticking with the theme of drummers that usher in new eras, Roger Taylor of Queen helped shatter glass ceilings and bring forth new innovative ways of not just playing drums, but of writing music, overall. Roger was the foundation for one of the most flamboyantly creative and earth shatteringly awesome rock bands to EVER grace the stage.

Roger Taylor was not only a phenomenal drummer, but he was also an exceptional singer. He not only contributed drumming to Queen‘s music, he also contributed some of the most widely known vocal harmonies in music history.

It’s a true shame that Roger Taylor never really gets the credit he is afforded. He is a brilliantly technical drummer and is not a shabby songwriter himself. Just be sure to go back and watch anything he does in music, there isn’t a single disappointing thing there. Also, while you’re at it, demand he and the band make a new album. It’s long overdue!

Ian Paice made it known very quickly early in his career that he and his band deep purple were NOT a band to judge by it’s cover. This goes especially for Ian Paice. Ian Paice was soon regarded to be one of the fastest drummers of all time, but even with this accolade, he is still one of the most underrated musicians of all time.

Now instead of explaining why Ian Paice is underrated, let it be known that he and his band Deep Purple were immensely underrated. They weren’t inducted into the Rock And Roll Hall Of Fame until 2016! That is nuts!

Now, it’s not like Ian Paice hasn’t gotten any recognition for his talents, he is widely respected for his influential style of drumming, it’s just that he deserves a LOT more credit than he is actually given.

It Should Be A Crime To Be This Good!

Phil Rudd was never truly recognized for his musical contributions, mainly because it was just meant to be that way. AC/DC is a song band meaning they aren’t all about flashiness; they are strictly about the music. Phil Rudd was born to be a member of this band. And if you ask him, he doesn’t need to be all that much in the spotlight. He’s fine just where he is! … Minus the criminal charges…

A Rock Solid Member Of The Rolling Stones

When thinking of The Rolling Stones, it’s typical to think about both Mick Jagger and Keith Richards, it’s not always that typical to think about drummer Charlie Watts. Charlie Watts is the quietly reserved foundation of legendary rock ensemble The Rolling Stones. Again, this is an example of a key member being overshadowed by the big players in the group.

Charlie Watts has a unique style of drumming that has given drummers a new way of thinking when approaching a drum kit. He knows where and where not to be loud, quiet, fast, and slow. He is a true visionary behind the kit and is due more credit than he actually has. He played a huge roll in developing the style and sound of this amazing band. It’s quite a shame he’s never regarded for being as good as he is…

Words Do Him No Justice!

What more is there to say about the most lovable drummers of all time, Mick Fleetwood. He is an innovator and mastermind behind the kit. He and his band Fleetwood Mac have revolutionized classic into the pined for gem it is today. This man has made a career out of turning a simple performance into a amazingly joyful gathering of Fleetwood Mac fans.

It is fairly uncertain why Mick is as underrated as he is. He has had it all for over several decades. He has the look, the talent, the charisma, and the technique. Why is this man not at the forefront of revered drummers!?! It just boggles my mind. Mick is truly one of the most innovative drummers on planet damn earth. He is a legend. It’s as simple as that.

He Got By With A Little Help From His Friends!

Now I can hear you all sharpening your pitchforks and lighting your torches in an illegal attempt to murder me. First of all STAY AWAY FROM MY FAMILY they had nothing to do with this. Second of all, hear me out. Ringo Starr, drummer for The Beatles, is madly popular, yes, but we’re not talking about celebrity status, we’re talking about drumming. People don’t ever really recognize Ringo Starr‘s contribution to the world of music. After all, he was a member of the biggest band EVER!

Ringo Starr wasn’t necessarily known for his flashiness for show off style, he was a drummer who was deemed a “song drummer”. He was never recognized for being as rhythmically complementary as he was. He was fairly simple, but ever so effective. And that says it all.