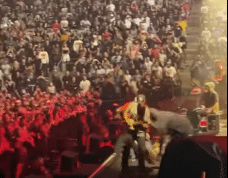 Tom Morello of Rage Against the Machine was accidentally tackled off by security while the band is performing in Toronto.

Rage Against the Machine is currently fulfilling their Public Service Announcement tour. As part of that, last 21st and 23rd of July, the band had their show in Toronto, Canada.

Unfortunately, Morello was accidentally knocked over by the security, who’s trying to catch a fan who ran across the stage. The incident occurred while the band was playing their classic hit “Killing in the Name.” When the vocalist, Zack De la Rocha noticed what happened, he immediately halted the show, shouting:

Although Morello was lucky enough to immediately bounce back, De la Rocha warned the crowd by asking:

The show then proceeded as if nothing happened. Indeed, the group’s Public Service Announcement tour is well underway, and with support from Run the Jewels, it’s a must-see show. It is the band’s first live return after over a decade. Their next show will be in Buffalo, New York and the trek will wrap up in April next year.

Watch the fan-filmed videos of the incident below.