Tiny Rock Fan Plugs In Guitar – Trust Us, You’re Not Ready For What She Does Next! 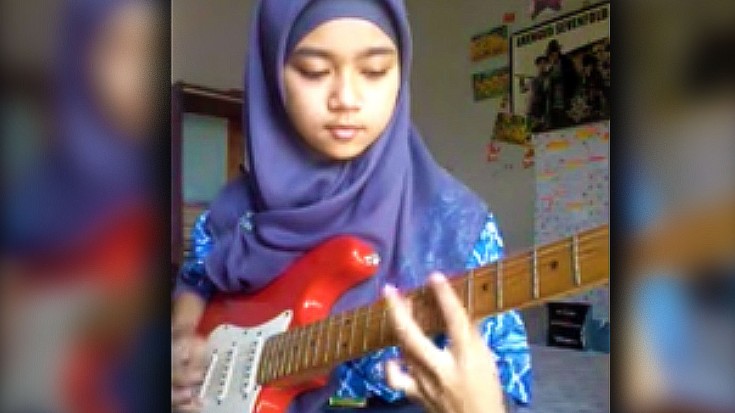 Talented Teen Tears It Up

One of the great things about rock music is how universal it is; whether you’re from Indiana or Indonesia, nothing unites quite like a healthy love and respect for good old fashioned rock music and in the case of 15-year-old Meliani of Indonesia, that love translates to some pretty serious shredding! Making the rounds this morning is footage of the teen rocker jamming away to metal band Lamb Of God’s “Hourglass” on her little red Fender Stratocaster and guys, we mean it when we say that we’re absolutely blown away by this young lady!

Fun Fact: Mel is from Indonesia, where their president Joko Widodo is such a big rock music fan that he can actually be spotted at festivals and concerts with ordinary citizens.

Sporting what looks like a school uniform in her bedroom adorned with posters from bands like Avenged Sevenfold and Linkin Park, Mel rips her way through this song so quickly that for a second it’s hard to believe that her hands are actually capable of moving that quickly; with just a handful of years spent playing guitar under her belt, it’s pretty clear that Mel not only has a serious passion for her craft, but a love for playing rock and roll that surpasses any perceived cultural differences. Be sure to check this young lady out – she’s a force to be reckoned with and we can’t wait to see what other awesomeness she’s capable of with a guitar in her hands!