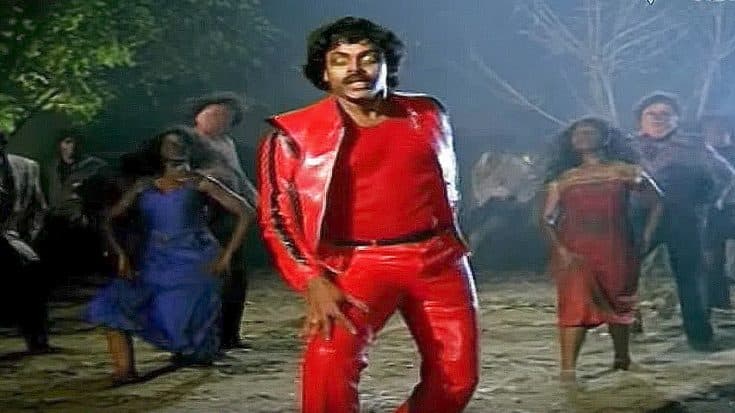 Y’all, we have heard every damned thing by now. 7 foot tall clowns singing Beatles tunes in coffee shops, pugs playing drums, microwaves turned into guitars – but somehow this video trumps them all and without the help of viewers who turned it into a viral sensation, we might never have stumbled across this moment of cinematic and musical greatness.

In 1985, Michael Jackson’s “Thriller” was reimagined by film director A. Kodandarami Reddy for his film Donga as a dance number featuring leading man Chiranjeevi dressed in a red leather costume not unlike the one Michael Jackson wore for the “Thriller” short film, executing a mixture of traditional Telugu and Western dance moves to a backing track called “Golimar” sung by Indian playback singer S.P. Balu.

With the help of a handful of backup dancers dressed as zombies and leading lady Radha acting appropriately terrified, “Golimar” became a viral internet meme a few years ago, becoming a widely seen video on YouTube and a serious favorite across the web more than 30 years after the parody’s debut. It’s hard to describe how great (and really, really funny) this video is without giving anything away, so take our word for it and check it out in the video below. Enjoy!