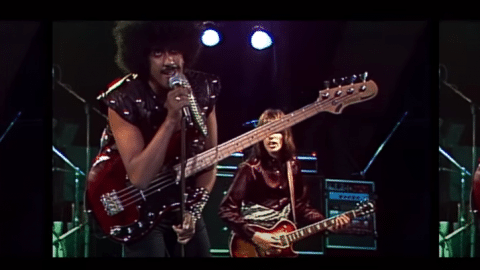 Thin Lizzy have shared the trailer for the highly anticipated documentary “Phil Lynott: Songs For While I’m Away” which will premiere this fall in Irish cinemas. Directed by Emer Reynolds, it follows Phil Lynott as a young black boy from working-class 1950’s Dublin and his journey towards becoming Ireland’s greatest rockstar.

Director Emer Reynolds said, “We are so delighted that ‘Phil Lynott: Songs For While I’m Away’ — our film about the legendary Phil Lynott — will soon be coming to the big screen! We can’t wait to share it with Irish audiences and to celebrate Philip and his extraordinary life and music.”

Daughters Sarah Lynott and Cathleen Howard-Lynott also added in a statement, “As always, we are incredibly proud of our Dad and we loved having the opportunity to look at the man behind the music with this film.”

According to the video description of the trailer, the documentary is “Told extensively through the words of Phil himself and focusing on some of his iconic songs, the film gets to the heart of Philip, the father, the husband, the friend, the son, the rock icon, the poet and the dreamer.”