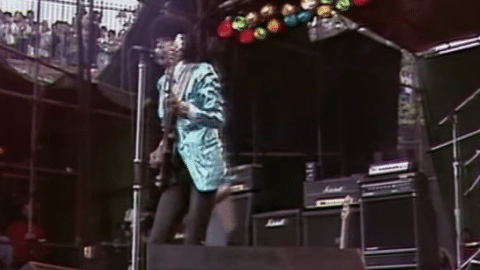 Thin Lizzy are streaming a video performance of their 1977 classic “Bad Reputation.” It marks as the first track to be previewed for the upcoming release of their concert film ‘The Boys Are Back In Town Live At The Sydney Opera House October 1978.’

The footage uploaded by Mercury Studios on Facebook showcases the lineup of Phil Lynott, guitarists Scott Gorham and Gary Moore, and drummer Mark Nauseef. While, the much-awaited concert film will feature more live performances from the band playing their famous anthems, such as “Jailbreak”, “The Boys Are Back In Town”, and “Me And The Boys.”

The film was previously released on VHS, Laserdisc, and DVD. Now, the upcoming 2022 version will present the concert in the highest quality possible, with remastered videos and remixed audio from multi tracks, plus five additional songs from this set that have never been officially released.

Out on June 24 alongside Lynott’s documentary, “Songs For While I’m Away,” directed by Emer Reynolds. The film will follow the personal life and music career of the legendary Irish rocker told through archived interviews of the band, his colleagues, family members, and anecdotes from Lynott himself.

The Boys Are Back In Town Live At The Sydney Opera House October 1978 will be available in two different formats: 2xDVD+CD and Blu-ray+DVD+CD, with the Lynott documentary being featured on Blu-ray. The Sydney concert is on DVD and CD in both packages.

You can watch their newly-released performance here.