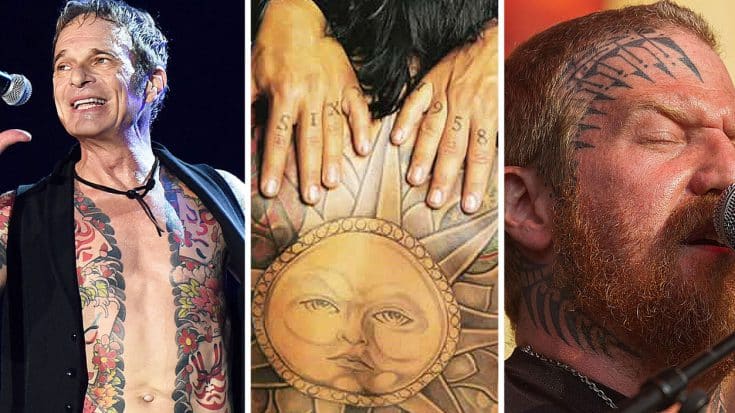 From his arms, to his chest, even down to his lower back, Rage Against The Machine bassist Tim Commerford had to endure several painful hours of solid sketching in order to acquire this intimidating symmetrical tattoo.

Blink 182 drummer Travis Barker’s plethora of tattoos is a perfect example of story telling through tattoos. The longer you look the more hidden things you’ll find, thus giving real insight to Travis himself.

Now, of course, Dave Grohl’s arm tattoos may not be the craziest or most elaborate on this list, but these feathers obviously required lots of time to get right. The detail alone requires extensive time on the table, but in the end these tattoos are amazing.

David Lee Roth must have a high tolerance to pain because as you can see, he lengthy tattoo artwork stretching from his arms all the way to his waist must’ve have been an excruciating experience, but then again it’s just one of many things that puts him in a league of his own.

Brent Hinds of Mastodon holds a special place on this list for his unique tattoo that if you look very closely through his sideburns actually connects from the side of his head through to his neck and behind his ear.

Late Avenged Sevenfold drummer Jimmy “The Rev” Sullivan was not only iconic for his impeccable drumming, but also for his iconic football jersey style back tattoo that read “Sullivan” with a “0” right under it.

It certainly goes without saying that Kerry King of Slayer is one of the most recognizable musicians in the world. And do you know why? It MUST be because of tattoos that have an aesthetic so sharp it could cut you just by looking at it.

Falling In Reverse front man Ronnie Radke is walking artwork. His tattoo work is also example of how the longer you look at it the more things you’ll find.

To try and touch on ALL of Nikki Sixx’s tattoos would take hours, but arguably his most impressive tattoo is the stone-faced sun on his back. With every tattoo around it revolving around this piece, this sun easily distinguishes Nikki from the rest.

And speaking of back tattoos, Black Flag front man Henry Rollins has one with a look that could kill. Like Nikki Sixx, Henry’s back tattoo features a stunning sun portrait but this time with a title that reads, “SEARCH & DESTROY”.

Drawn by legendary tattoo artist Paul Booth, this haunting yet elegant chest tattoo is one of Slipknot front man Corey Taylor’s defining looks. I just can’t imagine how painful it was to get it drawn on him!