The Who Honors 1979 Cincinnati Victims In Their City Comeback Show 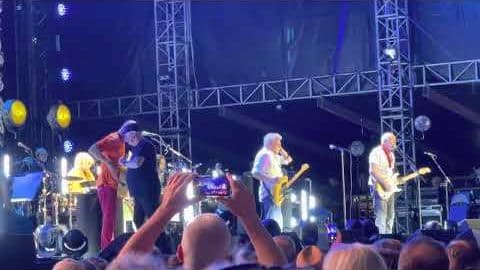 The Who returned to Cincinnati for the first time since the 1979 tragedy and paid tribute to the victims of the crowd surge happened on their first performance in the city.

The concert disaster took place on December 3, 1979, when the band performed at Riverfront Coliseum, now known as Heritage Bank Center. A rush of concertgoers outside the Coliseum’s entrance resulted in the deaths of 11 people.

On May 15, the Who performed at the TQL Stadium and turned the event into a memorial for the 11 fans who passed away on their previous show. The band provided front row seats to the family members of the nine victims.

A video message from Pearl Jam singer Eddie Vedder also played on the screen. He recalled how Pete Townshend and Roger Daltrey comforted him after 9 fans died during his band’s own “incredibly painful” incident at the Roskilde festival in August 2000. Vedder said on his message:

“We’re all thinking about you. It’s a great thing remembering those young people, who will never be forgotten.”

“You probably know we’re not being paid for this, so I’m not going to work very hard. But you are paying, and your money is going to great causes, many of which are related to what happened back here in Cincinnati in 1979.

“Time for us to both remember and try to forget.”

Some of the money raised at the show will go toward 11 scholarships in memory of the victims organized by a fund created in 2010 and previously supported by the Who.

The names of the victims appeared on the monitors around the stadium as the band played the classic “Love Reign O’er Me.” Townshend dedicated the song to “those still affected by this tragedy we have never forgotten.”

The names of the 11 rerunning around the stadium. Like a ring of ❤️ @TheWho @WCPO pic.twitter.com/H20iEuRRUK