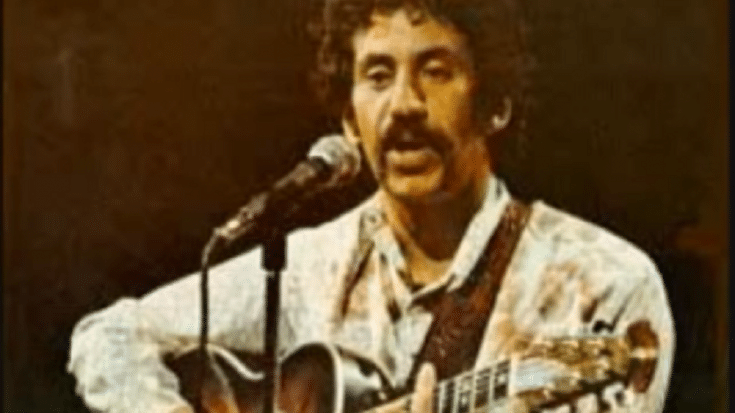 Jim Croce’s one of the musicians who was gone too soon. At the peak of his fame, he was killed in a plane crash that resulted in the death of five others. Unfortunately, that wasn’t his only tragedy.

Croce began playing the accordion when he was just five years old. It wasn’t long before he taught himself how to play the guitar.

In college, he attended Villanova University and earned his bachelor’s degree majoring in psychology. As a freshman, he started taking music a bit seriously by joining bands and playing in coffee houses and fraternity parties in different universities in Philadelphia. One time, his band even toured around Middle East and Africa.

“We just ate what the people ate, lived in the woods, and played our songs. Of course they didn’t speak English over there, but if you mean what you’re singing, people understand.”

While judging a contest at the Philadelphia Convention Hall, he met his future wife Ingrid Jacobson. After they got married, Croce received a $500 wedding gift from his parents to finance his first album Facets – with 500 copies pressed. His parents were hoping it wouldn’t be a success so he could stop trying to make it in the music industry and instead settle down with a “respectable” profession using the degree he earned. The album didn’t just sell out, but Croce made over $2000 in profit too.

Croce and Jacobson also performed as a duo. Their set list often included covers and sometimes, their original songs. He landed his first regular gig at The Riddle Paddock – a steak house in Lima, Pennsylvania. After the encouragement of record producer Tommy West who attended the same college with Croce, the couple moved to New York City. They recorded Jim & Ingrid Croce with Capitol Records and played in small clubs and college concerts.

They weren’t getting anywhere and so they sold all the guitars they collected except one. They then packed their bags and settled in the Pennsylvania countryside of Lyndell. They lived in an old farm and since performing every night alone couldn’t pay the bills, Croce had to take in several odd day jobs to make both ends meet. He drove trucks, taught guitar, and worked in construction while his wife learned how to can fruits & vegetables and even bake bread. All this time, Croce continued writing songs mostly about his personal experience at work and stories of people he met at truck stops.

Another acquaintance from Villanova, producer Joe Salviuolo AKA Sal Joseph, introduced Croce to Maury Muehleisen – a singer-songwriter, pianist, and guitarist. When the duo first recorded songs, Croce backed Muehleisen on guitar but it wasn’t long before their roles were reversed and Muehleisen ended up playing lead guitar to Croce’s music. They sent their songs to ABC Records. He signed a three-year record deal with the label. At this time, Jacobson gave birth to their child Adrian James Croce.

She stayed at home looking after the child with Croce hit the road to promote You Don’t Mess Around With Jim. The album was a success – several singles received heavy airplay. His second album, Life and Times, spawned the chart-topping hit “Bad Bad Leroy Brown”.

In less than two years, Croce performed in over 200 concerts including folk festivals and even TV shows. He was becoming a household name but financially, he still didn’t get the money he deserved. He also toured in Europe.

After he finished working on I Got a Name and while he was still touring, he became more homesick. He decided to take a break after the tour and settle at home with his wife and child.

On September 20, 1973 after finishing a show at Northwestern State University’s Prather Coliseum, he was off to Texas to play at Austin College. The chartered Beechcraft E18S crashed into a pecan tree upon takeoff. Investigation revealed the crash was due to pilot error.

A week after his death, Jacobson received the following letter.

I know I haven’t been very nice to you for some time, but I thought it might be of some comfort, Sweet Thing, to understand that you haven’t been the only recipient of JC’s manipulations. But since you can’t hear me and can’t see me, I can’t bullshit, using my sneaky logic and facial movements. I have to write it all down instead, which is lots more permanent. So it can be re-read instead of re-membered, so, it’s really right on the line.

I know that you see me for who I am, or should I say, as who I are. ‘Cause I’ve been lots of people. If Medusa had personalities or attitudes instead of snakes for her features, her name would have been Jim Croce. But that’s unfair to you and it’s also unhealthy for me. And I now want to be the oldest man around, a man with a face full of wrinkles and lots of wisdom.

So this is a birth note, Baby. And when I get back everything will be different. We’re gonna have a life together, Ing, I promise. I’m gonna concentrate on my health. I’m gonna become a public hermit. I’m gonna get my Master’s Degree. I’m gonna write short stories and movie scripts. Who knows, I might even get a tan.
Give a kiss to my little man and tell him Daddy loves him.

Remember, it’s the first sixty years that count and I’ve got 30 to go.
I Love you,
Jim

Some of his posthumous releases became instant classics. And his untimely death also sparked a renewed interest in his older songs. Sadly, it was too little, too late.