The Story Of The Truest Dedicated Beatles’ Fans Ever 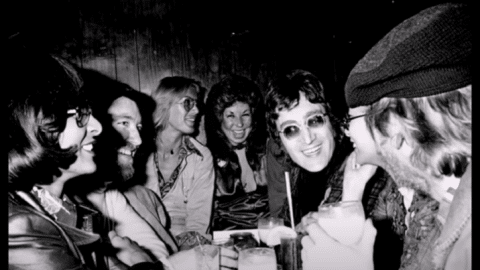 How far can you go to meet your favorite rock stars? Stalking out hotels, restaurants and backstage doorways to catch a glimpse? A group of teenage girls took things even further on Aug. 25, 1965. These three teenagers rented a helicopter to get close to the Beatles.

The band was in Los Angeles to perform a pair of shows at the Hollywood Bowl. Days prior to that, they spend a rare moment to relax. The band rented a mansion owned by actress Zsa Zsa Gabor on Benedict Canyon in Beverly Hills. The said location was secluded and offered much more privacy than any typical hotel could.

A year prior to that, the Beatles rented a different home, this time belonging to British actor Reginald Owen, during their L.A. stop. However, fans were able to discover the Bel Air location and even camped outside.

This led to complaints coming from the Bel Air homeowners association chastised the actor for allowing “transient accommodations,” noting that “a great deal of damage to property and inconvenience to residents” was caused by the Beatles visit.

Teenagers Sue Candiotti, Paula Glosser, Kay Zar and Michele Tummino were among those. They followed the group’s car one night, running red lights in an attempt to meet their idols. Instead, all they got was a speeding ticket. Zar later told ABC in Los Angeles:

“We vowed at that point, next year, we’d meet the Beatles.

“My dad taught me a lesson: If you’re going to do something, do it big. We were smart kids who knew what we wanted and didn’t take no for an answer.”

So, when a local radio station revealed the location of the Beatles’ 1965 rental, the girls began hatching a plan. The Benedict Canyon property was difficult to get to, located on the side of a hill. Borrowing a parent’s car wasn’t going to cut it.

Inspired by an I Love Lucy episode, the girls decided a helicopter would be their best bet. Zar found a pilot in the Yellow Pages who was willing to fly them over the house at the cost of $50 an hour. The chopper was only a two-seater, meaning each girl would have to take a turn hovering over the mansion. Still, the price was right, and a plan was in place.

Band publicist Tony Barrow was lounging by the mansion’s pool when the teens made their initial approach. He recalled that above them is a clear deep-blue Californian sky, then they heard the whirling of another low-flying helicopter. They thought these were some television reporters trying to spy on the goings on by the pool. Barrow said:

“Suddenly, a shrill voice called out through the air, ‘Paul, I love you! Paul, you’re wonderful!’

“Ringo, striking one of his daft poses in a borrowed bathrobe that was a couple of sizes too big for him, turned to Paul and remarked with a straight face, ‘Your lips didn’t move when you said that. How did you do that?’ Paul’s mouth opened wide in mock astonishment as the others laughed. Then we looked up and the truth dawned on us. A chorus of Beatles cried out simultaneously: ‘Fans! Fantastic!’”

Rather than being shocked or concerned, the Beatles were impressed. Barrow added:

“A teenage girl was leaning out of the helicopter, waving frantically at the Fab Four with one hand and holding in the other the type of horn-shaped loud-hailer that airborne cops used to shout through when they were in hot pursuit of runaway criminals.

“The helicopter’s rotating blades caused lots of little ripples on the surface of the pool water as it hovered 30 or 40 feet off the ground, whilst its passengers took snaps of the boys or shouted down messages of passionate endearment.

“Far from being annoyed by these adventurous visitors, the Beatles were full of admiration for the girls’ ingenuity. The episode amused the boys immensely and they waved back to each of the girls in turn, shading their eyes from the blazing sun as they gazed upwards. There was no security risk because the helicopter couldn’t possibly have landed on the steeply sloping hillside.”

Days later, Candiotti, Glosser, Zar and Tummino were able to come face-to-face with the Beatles on solid ground. After their helicopter adventure made them celebrities among Fab Four fans, Capitol Records invited the teens to an Aug. 29, 1965 press conference at the label’s headquarters. Their adventure truly brought them closer to the Beatles than most fans could even dream of.