The Story Of How Jimmy Page Recovered His Classic Guitar Case 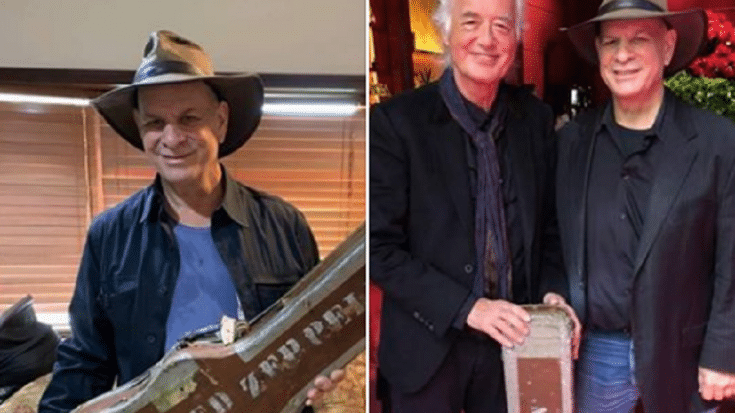 Musician and Led Zeppelin superfan Jeff Curtis revealed that it was John Bonham’s drum tech who gave him the guitar case that belonged to Jimmy Page back in 1972. It happened some time in June that year when Led Zeppelin performed at the Nassau Coliseum. When the concert ended, crewman Mick Hinton called out to Curtis – they already met a year prior in Madison Square Garden.

Curtis wrote on a Facebook post, “On a whim, I asked if I might come down and help them pack up the equipment. To my complete surprise, he says yes.” Hinton passed the guitar case to him and Curtis went with him backstage. And as it turned out, it was a lucky night for him.

Curtis added, “After the few minutes it took to pack up the drums, he says to me, ‘You can have that.’ I was speechless, to say the least! ‘Where will the guitar go?’ He took me over and showed me Jimmy Page’s number one Les Paul guitar in its brand new anvil road case. The case I was given was being discarded that night since its back was crushed and no longer afforded protection to the guitar. Talk about being in the right place at the right time!”

He decided to keep quiet about the item mostly for security reasons, “I had kept this a deep secret over the past 47 years in fear that someone might either burglarize my house or, worse, threaten me in order to steal it. For this reason, I had decided a couple of years ago that I no longer wanted the guitar case. Despite its certain significant monetary value to a collector, I had also decided that I wouldn’t ever sell it since making money off someone else’s fame is simply against my principals. I decided that I would find a way to personally return it to Jimmy Page. But how to accomplish this?”

When he saw Page’s Les Paul on display at New York’s Museum of Art, he contacted the curator who then passed on the message to Page. They met at a hotel and chatted for an hour. And that’s not even the best part. Page brought him gifts too.