The Rivalry Of Paul McCartney And Brian Wilson 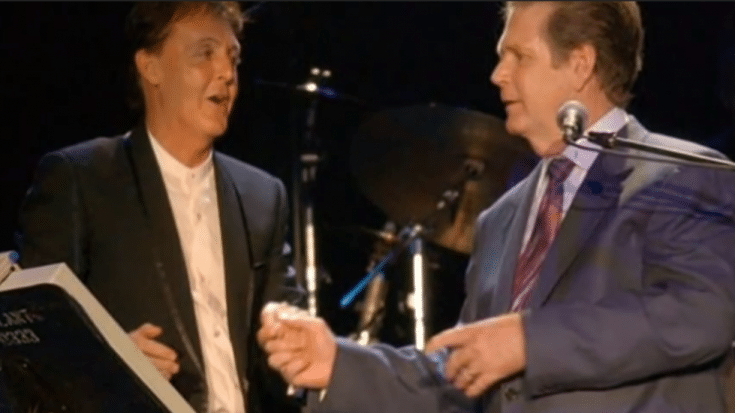 Macca Called It “A Healthy Competition”

In the 1960s, The Beach Boys and The Beatles were two of the biggest rock acts that dominated the decade. They churned out hit after hit in an attempt to out-do their contemporaries. Both Paul McCartney and Brian Wilson have admitted in the past how they drew inspiration from the other one’s music and thus people began pitting them against each other.

On May 19, 1966, The Beach Boys dropped their landmark record “Pet Sounds”. Although it wasn’t an instant hit in the US, Wilson’s genius was recognized by his peers particularly McCartney. After listening to the entire album, McCartney was blown away with the sheer brilliance of The Beach Boys’ music. He even went so far as to say that “no one is educated musically ’til they’ve heard that album” and it’s “unbeatable in many ways.” He cited it as having a huge influence on both his bass playing and songwriting. He also declared that “God Only Knows” is “the greatest song ever written”. He added, “I’ve often played Pet Sounds and cried.”

But while “Pet Sounds” is often linked to The Beatles’ “Revolver”, the former actually has better connection to the Fab Four’s tour de force “Sgt. Pepper’s Lonely Hearts Club Band.” Both LPs are revolutionary and groundbreaking. And perhaps what’s more interesting is the fact that what inspired Wilson to create “Pet Sounds” was The Beatles’ “Rubber Soul”. Wilson wanted to create a statement similar to it and he found it impressive that “Rubber Soul” was stunning from start no end with no fillers in between which was pretty rare at the time. It was cohesive and consistent.

After listening to it, Wilson told his wife: “Marilyn, I’m gonna make the greatest album! The greatest rock album ever made!” Wilson didn’t shy away from admitting how “Rubber Soul” influenced “Pet Sounds”, he even called the former his “main motivator” and his aim in writing “Pet Sounds” was to be “on the same level” as “Rubber Soul”.

Worlds collided in 2002 when McCartney and Wilson shared the stage to perform Macca’s favorite song “God Only Knows” at the Adopt-A-Minefield Benefit Gala in Los Angeles.

In a 2013 interview, Macca gushed about the same classic track saying: “Brian Wilson proved himself to be a really amazing composer and I was into chords and harmonies at that time and we ended up kind of in a rivalry.”

Paul McCartney and Brian Wilson respected and admired each other’s talent. It was a healthy competition and a matter of rising to the challenge of creating something better and more ambitious. Macca explained, “We’d put a song out then Brian would hear it then do one, which is nice.”

“It’s kind of like me and John, you’d try and top each other all the time,” he continued. “He eventually came out with ‘God Only Knows’ on Pet Sounds, I just think it’s a great song, it’s got the melody, harmonies, words, it’s just a great song and I love it.”