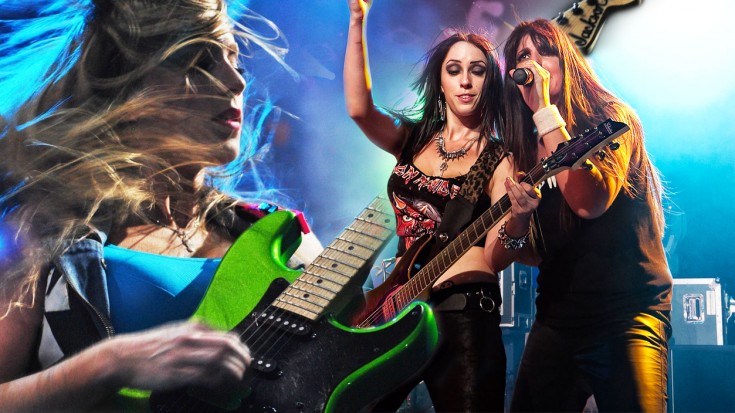 If the guys in Iron Maiden had daughters that played music, it would be these ladies. The Iron Maidens, an all-female metal band from Los Angeles are touted as the “World’s Only Female Tribute to Iron Maiden,” and for good reason – these ladies are incredibly talented and do one of the best jobs we’ve ever seen at covering Iron Maiden classics!

This live performance features the Maidens playing their rendition of ‘Run To The Hills’ and I don’t know what I love more; the fact that the vocalist Kirsten Rosenberg (“Bruce Chickinson”) has a vocal range that rivals Bruce’s, or the fact that guitarist Nikki Stringfield (“Mega Murray”) tears right through Dave Murray’s iconic solo without breaking a sweat!

Fun Fact: Each of the Iron Maidens adopted separate aliases to mirror their Iron Maiden counterparts.

Guys, you don’t want to miss this killer performance! We’re pretty sure this is one that even Iron Maiden would love!

+ Run To The Hills lyrics +

Run to the hills
Alright let’s spare me those hands in the air everybody c’mon, yeah

White man came across the sea
He brought us pain and misery
He killed our tribes, he killed our creed
He took our game for his own need

We fought him hard, we fought him well
Out on the plains, we gave him hell
But many came, too much for Cree
Oh will we ever be set free