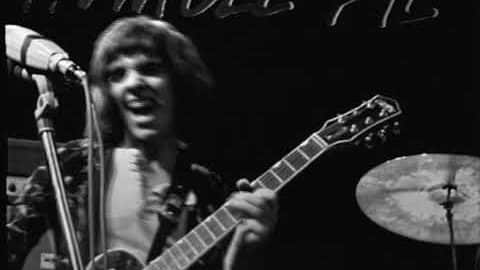 At the beginning of 1972, Humble Pie were at the height of their career since they’ve released their fifth studio album Smokin’.

The band hit London’s Olympic Studios to record the album that followed the 1971 hit Performance Rockin’ the Fillmore. It reached No. 6 on the Billboard 200 and gave the band an iconic song with “30 Days in the Hole.” Smokin’ also made the band headline concerts such as for Alice Cooper at Pittsburgh’s Three Rivers Stadium.

“I remember that night Alice came into our dressing room, leans against the door with his drink in his hand, and he looks at us and just went, ‘How do I follow that?'”

Humble Pie had to faced some challenges before reaching success with Smokin’.

“That happened quite a bit, honestly.”

Before David “Clem” Clempson joined the band, 1969 to 1971 frontman Peter Frampton decided to leave the quartet to start a solo career. Shirley recalls:

“We thought we were going to have to keep going as a three-piece because we couldn’t find the right replacement.”

“It was on fire immediately.

“There was no backlash to Peter not being there, which was a great relief. And we were quite smart about it without realizing we were being smart. A lot of the material was being written as we went along, and by the time we got into the studio after touring, we were like a well-oiled machine. That’s the best time to go in and record, when you’ve been on the road and you’re just steaming literally. That’s when a band’s at its best. We knew we had something special. Within the first two days, we recorded the ones we had been doing out on the road, then we started to create jams in the studio.”

Among the songs mentioned were the album’s opening track, “Hot ‘n’ Nasty,” and “30 Days in the Hole,” which Shirley says Steve Marriott had been working on while they were on tour in 1971.

“I remember sitting with him right before recording the live album, in his hotel room. We never actually played it until we did it as a jam in the studio, so there was a lot of freshness to it.

“He was writing out lines – ‘Newcastle Brown … it sure can knock you down … got you weak in your knees,’ all that stuff. And he’s asking me my opinion. I can’t imagine why.”

Although, the band broke up in 1975, they had intermittent reunions afterward. Marriott and Frampton were even talking about working together shortly before Marriott’s death in a 1991 house fire. Smokin’ has stood the test of time.

Shirley has a particularly fond memory of visiting with Van Halen, when his friend Sammy Hagar was part of that band and being told about its impact on a young Eddie Van Halen.

“He said, ‘Y’know, Smokin’ is one of the albums that got Van Halen started.

“He said, ‘It was absolutely one of our favorite albums. We were learning those songs as a band. ‘Sweet Peace and Time’ was one of our favorite tracks.’ That was so sweet because he doesn’t have to say stuff like that. But he was so sincere, and that made me feel so good about something I’m so proud of.”