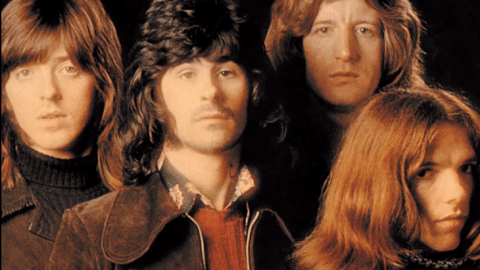 Badfinger was one of the first signed by the Beatles when they decided to get in the record-company business. In fact, their debut single was recorded when they were still known as the Iveys, one of Apple’s first releases.

In case you don’t know, their breakthrough single “Come and Get It” was written by Paul McCartney. The Beatles didn’t abandon them after the Fabs split up. In fact, George Harrison even produced their biggest hit, “Day After Day.”

However, the singer and songwriter Pete Ham killed himself in 1975 and that’s when the band broke up. They reunited with a new lineup in the late ’70s for a couple more records, but disbanded again a few years later. Going back to when they are still in their peak, here’s the list of their top 10 songs.

10. “Meanwhile Back at the Ranch / Should I Smoke”
Not too many people heard this because it was pulled out less than two months after its release because Badfinger’s managers and their label’s publishing firm were feuding. Too bad, because it is one of their strongest and album tracks.

9. “Love Is Gonna Come at Last”
From: Airwaves (1979)
Following Pete Ham’s death in 1975, Badfinger called it quits. Four years later, led by the group’s other singer and songwriter Tom Evans, they regrouped and released a new album which includes this song.

8. “Hold On”
From: Say No More (1981)
Evans, along with longtime member Joey Molland, tried one final time to lift the reunited Badfinger off the ground. “Hold On” managed to climb to No. 56, their best showing in almost a decade. But it didn’t last. The album stiffed, and Evans took his own life in 1983 at the age of 36.

7. “Maybe Tomorrow”
From: Maybe Tomorrow (1969)
This is a Beatlesque slice of British pop that managed to make it to No. 67 on the U.S. chart. A year later, the band returned with a new name.

6. “Apple of My Eye”
From: Ass (1973)
Badfinger’s last charting single to feature Ham is all about the group’s impending move to a new record label, which was offering them more money. Turns out they made the right decision: The bittersweet “Apple of My Eye” was the last single released by Apple that wasn’t by a former Beatle.

5. “Baby Blue”
From: Straight Up (1971)
The group and Apple’s relationship weren’t all that great at that time, but still managed to create some lovely songs like “Baby Blue” among all the chaos.

4. “Without You”
From: No Dice (1970)
We still think Nilsson’s version is the definitive one because he took it to No. 1 in 1971, but Badfinger’s more restrained original record a year earlier hits all the right emotional notes. A quiet gem.

3. “No Matter What”
From: No Dice (1970)
It is one of pop’s all-time mightiest hooks. From the terrific opening riff to the false ending, it’s pure pop heaven. But more than anything, “No Matter What” proved that Badfinger could write a great Beatles-like song without their mentors’ help.

2. “Day After Day”
From: Straight Up (1971)
Their biggest hit, “Day after Day,” was produced by George Harrison and features his distinctive guitar playing. Harrison was supposed to work on their third album, but then the Bangladesh flood happened and he turned the bulk of his attention to relief efforts via a benefit concert. With a deadline looming, Apple brought in Todd Rundgren to work behind the boards.

1. “Come and Get It”
From: Magic Christian Music (1970)
Probably the highlight of this record, and the main reason it even exists, is that Paul McCartney penned it and it reached no. 7 in the charts.