The Cover Of “Little Wing” By Eric Clapton And SRV 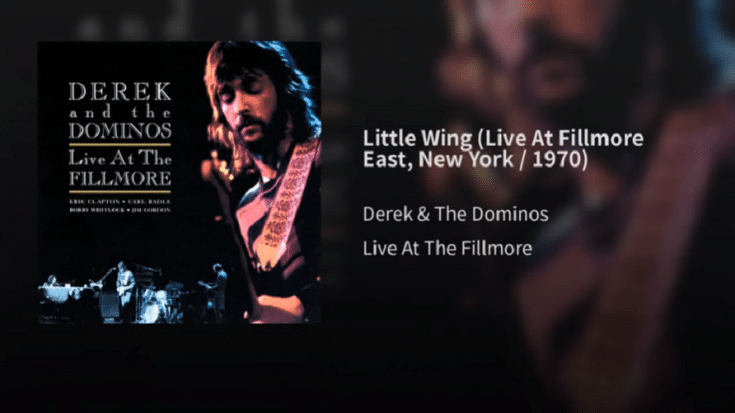 via Derek & The Dominos - Topic/YouTube

Jimi Hendrix left an indelible mark in rock, so much so that even with only three studio albums during his lifetime, his impact and influence remain as strong as ever today. His guitar playing is still untouchable and unrivaled – even with dozens of stellar axeslingers who took on the challenge of covering his classic hits – one of which is the 1967 masterpiece “Little Wing.”

Speaking about how the song developed, Hendrix said: “I got the idea like, when we were in Monterey and I was just looking at everything around. So I figured that I take everything I see around and put it maybe in the form of a girl maybe, somethin’ like that, you know, and call it ‘Little Wing’, and then it will just fly away. Everybody’s really flyin’ and they’re really in a nice mood, like the police and everybody was really, really great out there. So I just took all these things an put them in one very, very small little matchbox, you know, into a girl and then do it. It was very simple, but I like it though.”

And it became a staple in the Experience’s live repertoire. “Little Wing”, being one of Hendrix’s most enduring tracks, has been covered countless times in a wide array of styles. But two versions that stood out were those from friend and fellow rock icon Eric Clapton and Texas blues legend Stevie Ray Vaughan.

Clapton recorded it with his band Derek and the Dominos for their sole studio effort, “Layla and Other Assorted Love Songs.” The sessions were held prior to Hendrix’s untimely death and Clapton originally intended for it to be a tribute to a living legend but according to Clapton biographer Michael Schumacher, “now that Hendrix was gone, the song hit on a different emotional level.”

Throughout his career, Clapton regularly performed “Little Wing” because as he explained: “I found that his lyricism when he was writing ballads, like “Wind Cries Mary” or “Little Wing,” was so different, in a way, that it was powerfully attractive to me. [It was] much more structured than some of his other things, and more melodic, too. [“Little Wing”] stands up so well that anyone could do it.”

Stevie Ray Vaughan, on the other hand, recorded his instrumental version in 1984 but was featured on his 1991 final studio album with Double Trouble – “The Sky Is Crying.” It’s the very definition of “taking a song and making it your own.” He gave it the full SRV makeover and basically breathed new life into the song. He made his six strings sing and squeezed out every single emotion he could find from his guitar.