The 20 Incredible Songs Written About The Beatles 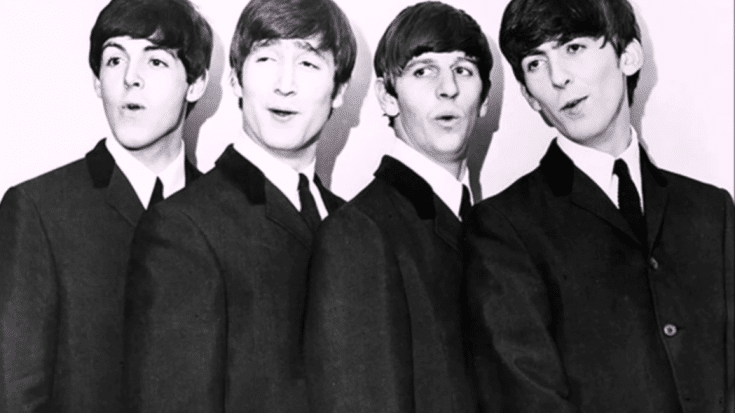 The Beatles is no doubt the biggest influence of many artists in their generation and even today. It doesn’t matter what genre your music is, even those outside of rock looked up to the Fab Four as their number one inspiration into making songs. And while, there’s a lot of tracks recorded with the Beatles’ sound and style in minds, there are also songs that literally talked about the band. Below is a list of 20 incredible songs written about The Beatles, and some of them are actually written by them, take a look.

20. “Living in the Material World,” George Harrison (1973)
It’s no secret that Harrison made so many songs after the Beatles’ disbanded. He was frequently shoved in the background as Lennon and McCartney received more exposures in songs. In the title track to 1973’s Living in the Material World, Harrison mentioned his former bandmates, meeting “John and Paul here in the material world,” while wailing the “material world” isn’t all it’s meant to be: “Though we started out quite poor, we got Richie on a tour, got caught up in the material world.” Harrison showed of these emotions into songs like “Run of the Mill,” “Wah-Wah” and “Not Guilty.”

19. “Ringo Beat,” Ella Fitzgerald (1965)
The younger generation weren’t the only ones who took a huge admiration on the Beatles; artists from earlier times were also interested in the band. Starr took everyone’s attention once again in jazz great Ella Fitzgerald’s tribute to the drummer’s performance style. While “Ringo Beat” didn’t do quite well, it represented just how vital Starr was to the band’s triumph and his impact on modern pop drumming: “He beat a kind of rhythm, and they clamored for more.”

18. “Ringo for President,” the Young World Singers (1964)
During 1964’s “Ringo for President,” the Young World Singers acknowledged the drummer as a desirable candidate for the position because “his platform will be fair” and “he doesn’t talk about war.” During the election season of that same year, the track was released and a couple of committed supporters went so far as to include Starr’s name as a third-party candidate, not taking into consideration his birthright British citizenship that would cancel any chance of election.

17. “Ringo, I Love You,” Cher (1964)
18-year-old Cher’s first single, released under the alias Bonnie Jo Mason, revolved around how admiration for the Beatles’ drummer. Phil Spector co-produced the track during the height of his triumph. Unfortunately, the track didn’t make it that far. The fact that a good number of listeners thought the singer was a man due to Cher’s lower vocal register, and few radio stations picked up on the song negatively impacted the song.

15. “Sue Me, Sue You Blues,” George Harrison (1973)
In “Sue Me, Sue You Blues”, Harrison threatened – “Bring your lawyer and I’ll bring mine, get together, and we could have a bad time”. It was in relation to the monetary difficulties driven by the Beatles’ disbandment. Harrison was precisely pertaining about McCartney’s 1971 legal case revolving around the managing of the group’s Apple Corps. Funny enough, the track was recorded at the Apple headquarters in London, and featured various guest artists consisting of bassist Klaus Voormann, pianist Nicky Hopkins, drummer Jim Keltner and singer Gary Wright.

13. “I Want to Kiss Ringo Goodbye,” Penny Valentine (1965)
A British music journalist named Penny Valentine, came up with a novelty song “I Want to Kiss Ringo Goodbye” which revolved around a girl who was disheartened after knowing that her favorite Beatle was about to get married. It was about the same time when Starr married his first wife, Maureen Cox, in February 1965. Valentine later continued to write for publications like Melody Maker, Record Mirror, Sounds and Creem. In 1973, she was recruited by Elton John as a press agent for his Rocket record label.

11. “Here Today,” Paul McCartney (1982)
Two years following Lennon’s assassination, McCartney made a song about their friendship which took form through a made-up talk between the two. “Here Today” explicitly pertains to one evening when a hurricane in Florida hindered their performance plans while on their debut U.S. tour in 1964. “I remember drinking way too much, and having one of those talking-to-the-toilet bowl evenings,” McCartney reminisced to The Guardian in 2004. “It was during that night when we’d all stayed up way too late, and we got so pissed that we ended up crying — about, you know, how wonderful we were, and how much we loved each other, even though we’d never said anything.”

10. “Empty Garden (Hey Hey Johnny),” Elton John (1982)
Elton John was the final member to share a stage with Lennon. During Thanksgiving Day 1974, both performed at New York’s Madison Square Garden to sing a few songs, as well as their hit collaboration “Whatever Gets You Thru the Night.” After eight years, John released “Empty Garden (Hey Hey Johnny),” made in tribute to his late friend. The track’s music video showed John singing in front of a building which represented Lennon’s apartment, the place of which his killing took place.

9. “Beatles Forever,” Electric Light Orchestra (c. 1983)
“Beatles Forever” was never formally made public but is worth beading in mind considering Jeff Lynne’s appreciation for and bond with the Beatles. Initially meant for ELO’s 1983 album Secret Messages, the track failed to make it to the final version when the record was shortened from a double to single LP. Lynne has articulated that he’s not sure of whether he wants to push the song forward. “It’s just one I’d rather keep in the cupboard,” he told Rockline in 2001. “It’s ’cause it’s so fawning, you know. It’s so over the top. … Maybe one day it’ll come out. I’d like to sort of redo it or something.”

8. “Glass Onion,” the Beatles (1968)
Even prior to the bands break-up, the Beatles weren’t new to making fun of themselves. “Glass Onion” added a laundry list of Beatles song references: “Strawberry Fields Forever,” “I Am the Walrus,” “Lady Madonna,” “The Fool on the Hill,” “Fixing a Hole.” Lennon was targeting for puzzlement and disarray. “I threw the line in – ‘The walrus was Paul’ – just to confuse everybody a bit more,” he told Playboy in 1980. “It could have been ‘the fox terrier is Paul,’ you know. I mean, it’s just a bit of poetry. It was just thrown in like that.”

7. “4th Time Around,” Bob Dylan (1966)
The Beatles’ bond with Bob Dylan is still puzzling . They first met in 1964 and then got along together in 1965 when Dylan spent time in the U.K. Dylan formed a great relationship with Harrison, taking part together in the Traveling Wilburys, but it was Lennon that Dylan might have been influenced by in “4th Time Around.” A lot had interpreted the Blonde on Blonde song as a retort to “Norwegian Wood,” given the resemblance of both songs. In 1968, Lennon revealed that the tack made him “paranoid” when Dylan made him hear it for the first time back in London. “He said, ‘What do you think?’ I said, ‘I don’t like it.’ I didn’t like it,” Lennon told Rolling Stone. “I just didn’t like what I felt I was feeling – I thought it was an out-and-out skit, you know, but it wasn’t. It was great. I mean he wasn’t playing any tricks on me. I was just going through the bit.”

6. “How Do You Sleep?,” John Lennon (1971)
Lennon wasn’t famous for being subtle. It was deciphered on Imagine’s “How Do You Sleep?” In addition to that, he references the popular “Paul is dead” speculations, implying that McCartney had been occasionally creatively lost. Written at what many contemplate to be the peak of their clash, Lennon took pushed the feud further. “The only thing you done was yesterday, and since you’ve gone you’re just another day,” a reference to McCartney’s “Yesterday” and his solo single “Another Day.” Lennon later reiterated that he didn’t mean for the song to sound so harsh. “I wasn’t really feeling that vicious at the time,” Lennon told Playboy in 1980. “But I was using my resentment toward Paul to create a song, let’s put it that way.”

5. “When We Was Fab,” George Harrison (1988)
Through the years, the band’s reminiscence were poured into solo music by the members who were once Beatles. Harrison conveyed this in “When We Was Fab,” which referenced to “I Am the Walrus” and talked about how hard it was for the Beatles to hold everything together given “the microscopes that magnified the tears.” Electric Light Orchestra’s Jeff Lynne assisted in writing and producing the track; Starr played the drums and sang the backing vocals. A lot of Beatles references could also be seen in the song’s music video, including a copy of Lennon’s Imagine and a left-handed bass player in a nod to McCartney.

4. “Early 1970,” Ringo Starr (1973)
There was no doubt of who “Early 1970” was about: Ringo Starr addressed all members of the Beatles. McCartney, who resides on a farm with “plenty of charm” as Starr describes, Lennon who rests in bed with his partner alongside him, and Harrison, the “long-haired, cross-legged guitar picker.” “Early 1970” was included in Starr’s solo single “It Don’t Come Easy.” The sing was a success, but the single’s B-side is unforgettable for its precise description of each Starr’s bandmates from one who was most familiar of them.

3. “Too Many People,” Paul and Linda McCartney (1971)
Paul McCartney didn’t really intended to come up with a song relaying the Beatles’ exhausting working environment but it was still made possible through “Too Many People,” a song included in McCartney’s 1971 album Ram. “It’s nothing, it’s so harmless really, just little digs,” McCartney expressed to Mojo in 2001. “But the first line is about ‘too many people preaching practices.’ I felt John and Yoko Ono were telling everyone what to do. And I felt we didn’t need to be told what to do. The whole tenor of the Beatles thing had been, like, to each his own. Freedom. Suddenly it was ‘You should do this.'”

2. “Stand Up and Holler” (“All for the Beatles”), Harry Nilsson, (1964)
A couple of years prior to Harry Nilsson fame, “All for the Beatles” was made public which also had “Stand Up and Holler” as a back up title. The song was acknowledged to an alias, Foto-Fi Four. The song attributes a distinguished Bo Diddley beat and was wrapped up with a film reel which showed the first arrival of the Beatles in the U.S. in February 1964. Unfortunately, the song didn’t land on the charts, but the film and physical single are now well-seeked collector’s pieces.

1. All Those Years Ago,” George Harrison (1981)
As years went by, George Harrison’s bond with John Lennon drifted away from brotherly to broken as Harrison’s eagerness to depart from the band became firmer. In spite of that, years later, he still showed deep appreciation to their friendship through 1981’s “All Those Years Ago”. This tribute was released five months after Lennon’s death. The song also hints parts of “All You Need Is Love” as well as Lennon’s “Imagine.” “I always looked up to you, now we’re left cold and sad,” Harrison sings. “You were the one who imagined it all, all those years ago.”