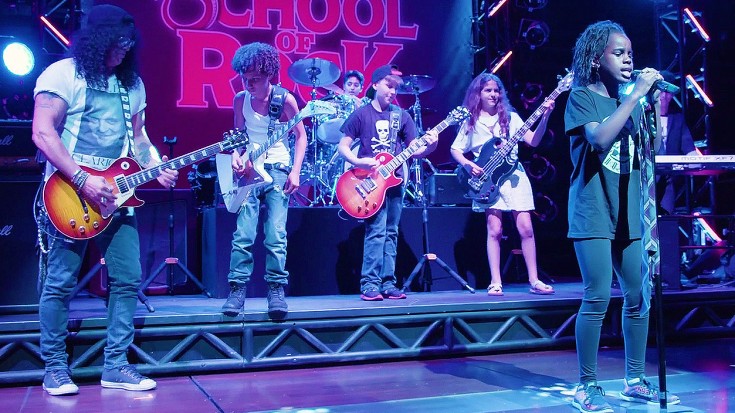 While rehearsing for their Tony Award nominated Broadway musical School of Rock, the stars of the show were surprised by a rock legend. While the actors were practicing their rendition of “Sweet Child of Mine,” Guns N’ Roses guitarist and rock icon Slash strolled on stage to join them! The guitarist seamlessly jumped right into the jam session, and contributed to their rehearsal. The Broadway stars, however, kept their cool and didn’t freak out. They kept doing their work and the show went on. Following “Sweet Child of Mine,” Slash joined them for a jam of “Paradise City.” The GNR guitarist was very impressed, and had some kind words to say about the young rockers.

“It was really cool to meet such an enthusiastic and talented bunch of young rock ‘n’ rollers. They were great kids as well as players.”- Slash said.

School of Rock is a musical based off of the film of the same name starring Jack Black. The plot follows a deadbeat guitar player who pretends to be a substitute teacher in order to make money to pay his rent off. While at the school, he discovers the students have musical talents and transforms them into a rock band. The musical is currently on Broadway in New York, and has received great reviews from big name classic rock stars including Stevie Nicks. Nicks met the children of the cast, and performed with them at a show back in April.

Check out the video of Slash surprising these wonderful and talented kids down below!