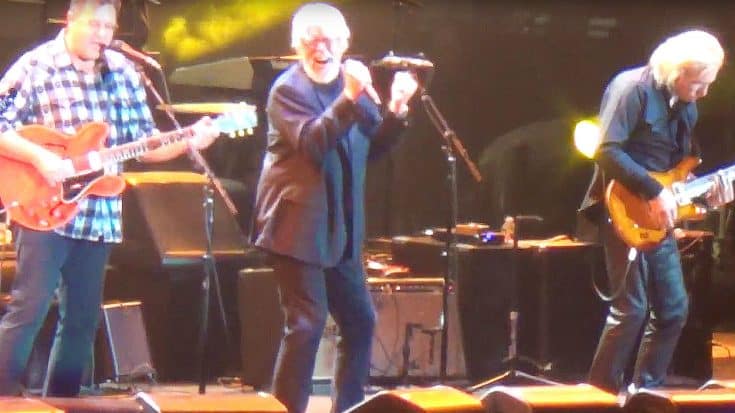 This weekend saw the Eagles take flight once again, defying every odd that said they’d never take the stage together again following the death of Glenn Frey early last year and in true Eagles fashion, they didn’t do it by half. With a lineup that included Vince Gill and Glenn’s own son, Deacon, the Eagles wasted no time reasserting their dominance as one of rock’s most fiercely respected bands, earning screams of delight as special guest Bob Seger strolled onto the stage just in time to take us all to church with “Heartache Tonight”.

Flanked by the airtight harmonies of the Eagles to his left and to his right, it’s a party from the first moment to the very last as Seger digs way down deep and calls forth the soul and drama of “Heartache Tonight,” no doubt sharing the excitement of a reunited Eagles if his dancing and shimmying is any indication.

Fun Fact: “Heartache Tonight” was born during a jam session between Glenn Frey and J. D. Souther. Frey and Souther wrote the first verse while listening to Sam Cooke songs and on a whim called Bob Seger to sing him the verse, only to have Seger blurt out the chorus.

Seger, who co-wrote “Heartache Tonight” with the Eagles for their 1979 album The Long Run and supplied backing vocals for the track, has since remained a close friend of the band and especially Glenn Frey, whose friendship with Seger spanned over 50 years – no wonder he pulled out all the stops that night for a performance big enough to shake the heavens and hopefully reach Glenn.

If there’s anything we love more than Bob Seger and the Eagles, it’s the sight of these two powerhouses together on one stage, reminding us what rock and roll is really about in a performance that you simply must check out. Enjoy!