Surf’s Up! Teen Drumming Sensation Joins Her Dad For Rockin’ Cover Of The Surfaris’ “Wipe Out” 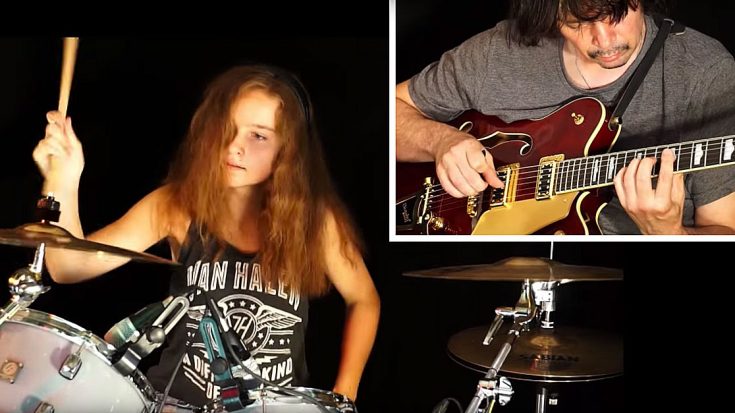 In a year where the rock world is saying goodbye to its greats at a truly alarming rate, there’s nothing that puts our fears to ease the way that watching the next generation of rockers emerge does. German teen drumming sensation Sina is the latest in a long stream of talented teens taking the music world by storm via YouTube, and for good reason: she rocks. Last week saw the 17 year old drummer raising eyebrows on Lynyrd Skynyrd’s official Facebook page with her cover of the band’s 1974 anthem “Sweet Home Alabama,” and now we’ve got footage of her with her old man jamming The Surfaris’ 1963 classic “Wipe Out,” complete with dear old dad splitting guitar and bass duties while Sina holds it down from behind her kit.

Fun Fact: “Wipe Out” – both the Surfaris’ version as well as cover versions – has been featured in over 20 films and television series since 1964, appearing at least once a decade.

While we love skilled drummers – especially ones as young and fiercely determined as Sina – what we love even more is watching drummers have fun with their craft and Sina absolutely delivers in that regard, looking relaxed and happy during the entire video and letting herself smile and enjoy the ride after negotiating some pretty tricky drum fills. If you haven’t caught onto the fuss surrounding this talented young lady, now’s the time – be sure to check out Sina’s cover of “Wipe Out” in the video below, it’s one you don’t want to miss!