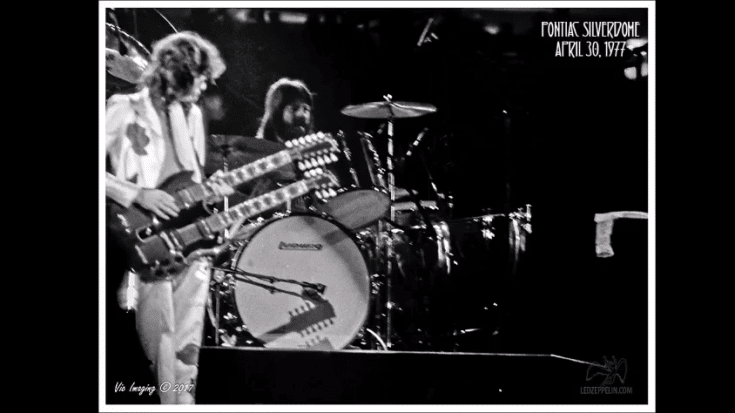 Led Zeppelin’s one of the biggest rock acts in the 1970s. And in 1977, they have long past cemented their status as titans in the music industry. During that year, they were slated to embark on a 52-date trek in support of their seventh studio album “Presence” and as it turned out, it would become their final concert tour.

It was supposed to kick off on April 1 in Dallas and then wrap up on August 13 in Philadelphia. But they had to cut the dates short because of the death of Robert Plant’s son.

Nevertheless, the tour was a massive financial success – tickets were selling like pancakes with sales at around 72,000 a day. But it wasn’t without difficulties and some bumps in the road for the band.

On April 30 at a stop in Detroit, Michigan, Led Zeppelin played at the Pontiac Silverdome in front of 76,229 people. It broke records for attendance for a solo indoor attraction previously held by The Who with 75,962 audience members at the same venue.

In a 2014 interview with 94.7 FM WCSX’s Trudi Daniels and Jim O’Brien via MLive, guitarist Jimmy Page recalled: “It was surreal. We played to massive crowds on the outside, but that reminded us of A Clockwork Orange or 2001. I could relate to that because those were the sort of films back in the day. It was really odd walking into this air-lock…and it was vast, But I think we played well under the circumstances.”

Led Zeppelin powered through a 19-song set full of their classic hits.