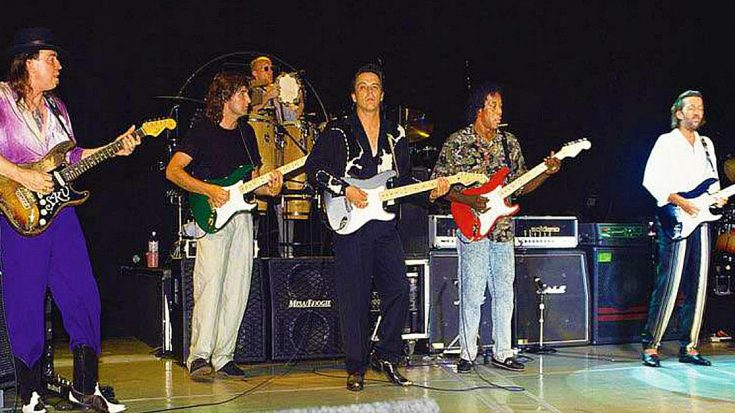 Stevie Ray Vaughan’s final concert took place on the night of August 26th, 1990 and by all accounts, it was one of the best concerts the 35 year old guitarist had ever played. Rejuvenated, happy, and playing better than he’d ever played despite being smack in the middle of a tour spanning 3 legs and 147 shows over the course of 18 months, Stevie was unstoppable that night as he traded lick after lick with friends and idols Eric Clapton, Robert Cray and Buddy Guy while basking in the joy of success and his newfound sobriety with his brother Jimmie. After an electrifying evening spent on stage with men whose own careers inspired him as far back as childhood, Stevie hit the stage one last time for an encore of “Sweet Home Chicago” that, stretching up to nearly 17 minutes in length, feels more final than any song has a right to be.

Sprawling, fiery and full of action packed guitar solos highlighted by twinkling piano riffs, the performance marked the last time Stevie Ray Vaughan would ever step onstage or hold a guitar and thankfully, someone had the foresight to record it all, immortalizing some of Stevie’s final moments on earth in a way that we’re pretty sure he would have wanted. Whether it was the dream Stevie had had the night before that foreshadowed his death as he dreamed of being a witness to his own funeral or just the energy of playing with a dream lineup of musicians that fueled his performance that night we’ll never know – but what we do know is that on the 28th anniversary of his death, we’ve never been more glad to hear one of the greatest musicians to walk the earth immortalized as he did the one thing he lived and breathed for!