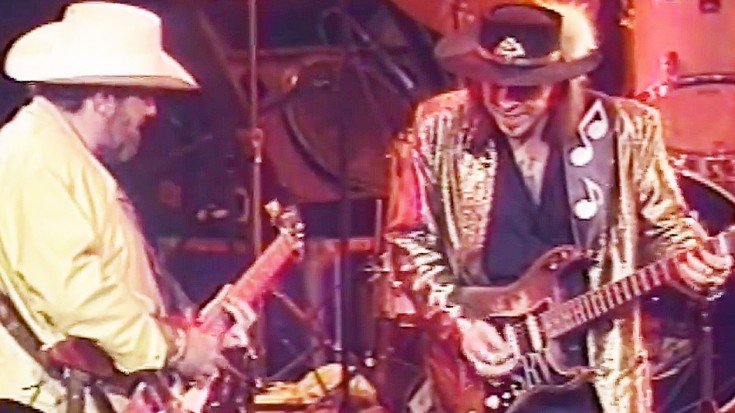 From DVD Live In American Caravan, Stevie teams up with blues legend Lonnie Mack to perform one of the greatest blue duos to “Wham.” Inspired heavily by Mack’s guitar work, Stevie used to study and observe him growing up and actually adopted a lot of his style over the years.

Interesting Quote: “We was in Texas looking for pickers, and we went out to see the Thunderbirds. Jimmie was saying, ‘Man, you gotta hear my little brother. He plays all your songs.’ He was playing a little place called the Rome Inn, and we went over there and checked him out. As it would be, when I walked in the door, he was playing ‘Wham!’ And I said, ‘Dadgum.’ He was playing it right. I’d been playing it wrong for a long time and needed to go back and listen to my original record. That was in ’78, I believe.” – Lonnie Mack

During this feel-good instrumental you can see Stevie gazing over at Lonnie in awe of his talent and technique; it almost looks like Stevie is a kid in a candy shop again. You can also really see the style and tricks that Stevie adopted from the legend, proving how special it is to see these two play together.

Imagine jammin’ out with your legend… Enjoy!