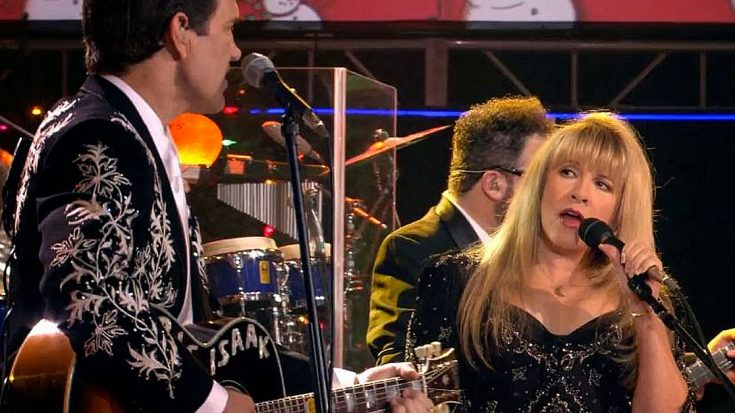 Long before Stevie Nicks was rocking stages around the world as a solo artist and with Fleetwood Mac, she cut her teeth on country tunes with her grandfather Aaron Nicks, a struggling country singer who taught Stevie how to sing and play guitar at an early age. Occasionally we hear shades of her early country influences, but in 2004 they came out to play once and for all when Stevie joined platinum selling artist Chris Isaak for a holly jolly duet of “Santa Claus Is Coming To Town”.

Normally, holiday performances can be a little stuffy and overly sentimental, but not this one; Chris kicks things off by “accidentally” having his backing band play Fleetwood Mac’s “Rhiannon” instead of “Santa Claus Is Coming To Town,” and then goes on a fun little tangent about how Santa Claus is secretly watching all of us and that on second thought, kids need more cautionary tales about creepy old elves who hide under their beds in December, which left Stevie and their audience cracking up. Once things really get moving, Stevie and Chris make for a formidable pair as Chris helps Stevie navigate the country roots she so rarely gets to return to to craft a holiday classic for the ages. Enjoy!