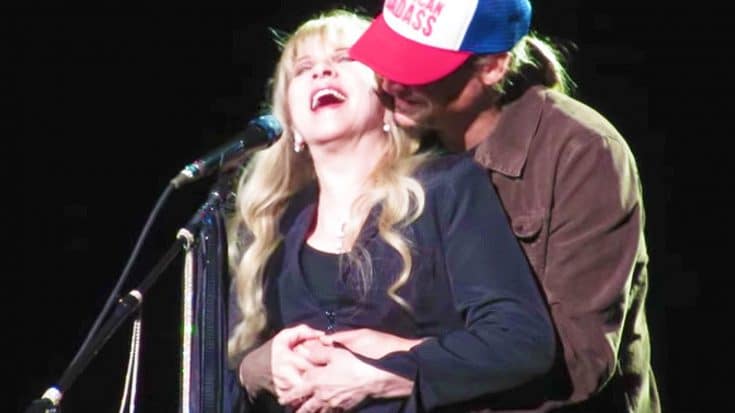 What A Touching Moment!

There’s no denying that Stevie Nicks of Fleetwood Mac is legendary. Her voice and songwriting helped inspire a generation, and not only that, she’s drop dead gorgeous, with a style that hasn’t changed much over the years.

While on tour with Fleetwood Mac in 2014, Stevie took to the stage with Lindsey Buckingham and performed a beautiful rendition of her hit classic “Landslide.” Before the start of the song, Stevie dedicated the song to one of her best friends, Kid Rock.

Well, little did she know, Kid Rock was actually at the show, and in the middle of the performance snuck up behind her! He wrapped his arms around her and gave her a kiss on the cheek. After the song was finished, the two embraced, and it served for a very magical on stage moment.

These are the moments that are some of the most amazing to see live. It’s one thing if you know when to expect an artist to come out, but it’s another if it’s a complete surprise. The crowd absolutely lost it when Kid Rock came out and so did Stevie. The look on her face told the whole story. We can only hope that more moments like this happen more frequently, because through and through, it was an adorably touching moment!

Check out the sweet moment down below, and let us know what you think!