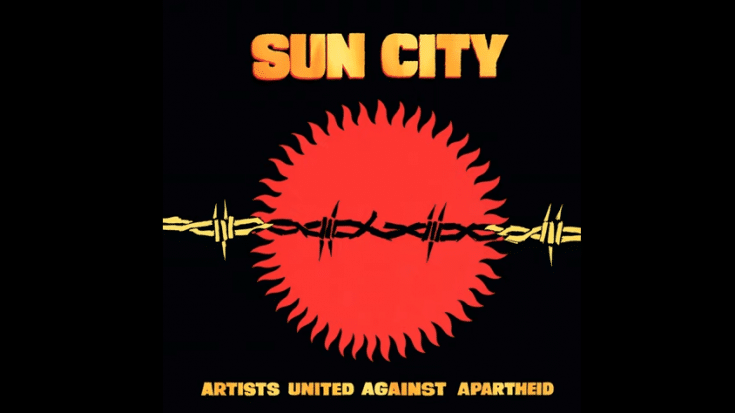 via Artists United Against Apartheid - Topic/YouTube

For The First Time Since Its Vinyl Release

Steven Van Zandt is set to re-release his 1985 LP “Sun City” by Artists United Against Apartheid. It features music by several rock icons such as Peter Gabriel, Bruce Springsteen, Bono, Ringo Starr, Keith Richards, Ronnie Wood, Bob Dylan, and Lou Reed, among others. This is to commemorate the 30th anniversary of Nelson Mandelan’s historic release from a South African prison.

It will be reissued for the first time in 35 years.

Steven Van Zandt brought together a stellar supergroup to sing the title track “Sun City” in the style of “We Are The World.” He said, “It took courage for artists to make the leap from social concerns to political action for a cause that was virtually unknown at the time. Victories that clear cut are rare in the sphere of international liberation politics. Once in a lifetime if you’re lucky.”

He told Rolling Stone about the LP, “Financially, it was apocalyptic. That said, we did take years off the life of the South African government. But is that worth losing all of my friends, all of my power base, all my juice, all my celebrity capital, to save a few lives? And you’ve got to say, ‘Yeah, sure. It was.’”

The Sun City re-release is part of his RockNRoll Rebel – The Early Work limited edition box set along with remastered versions of Men Without Women (1982), Voice Of America (1983), Freedom – No Compromise (1987), Revolution (1989) and Born Again Savage (1999). Starting March 13, however, these albums will be available individually via Wicked Cool/UMe.