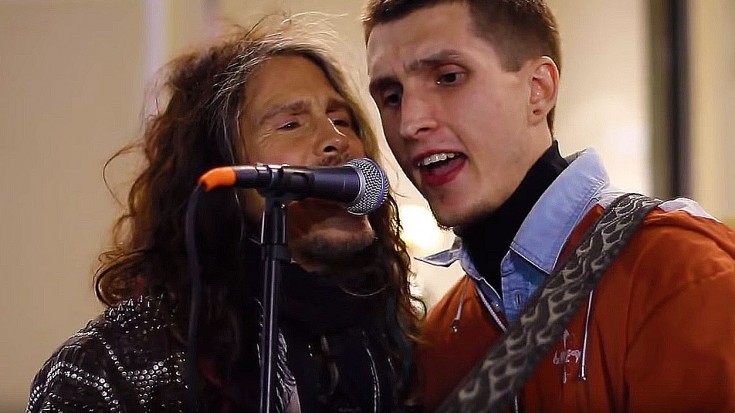 You Don’t Want To Miss This!

Steven Tyler is one of the coolest rockstars on the planet. Not because he’s a fantastic performer and songwriter, but because he’s a big kid at heart and he genuinely adores his fans! This exclusive video, shot by a fan in Russia while Aerosmith was on their Blue Army Tour features Steven delivering an awesome impromptu performance of ‘I Don’t Want To Miss A Thing’ alongside a street performer who happened to be performing the song that evening.

Be On The Look Out: Steven is always up for impromptu singalongs with his biggest fans!

I don’t know what I love more; the fact that the street performer is obviously a little nervous, or the fact that Steven is as kind as ever and gently guides the young man through Aerosmith’s smash hit before their small audience. In a world full of self absorbed celebrities, it’s a breath of fresh air to see legends of Steven’s caliber take the time out of their day to enjoy what they do beyond the scope of flashing lights, paparazzi and sold out tours – he definitely gave that young man an experience he’ll never forget!