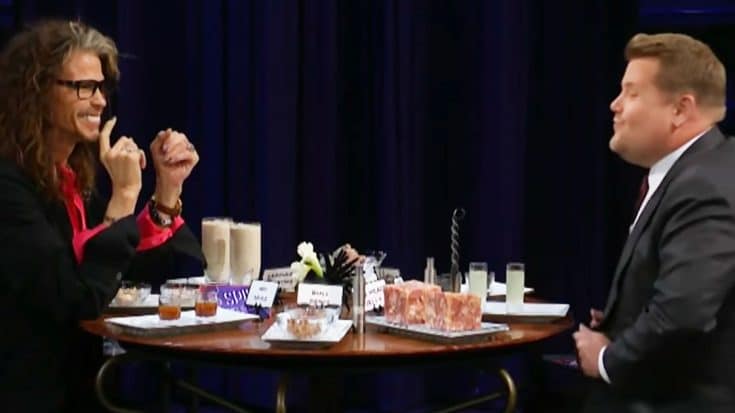 Just Steven Tyler Being His Usual Awesome Self

If you’ve ever stayed up late at night and watched James Corden, you’d realize how underrated his late night show really is. He has a segment called “Spill Your Guts Or Fill Your Guts” where he invites a celebrity to either answer given questions honestly, or eat something DISGUSTING from a revolving table. Yep, it’s definitely not your average interview.

One of the funniest things about this is how he brought out his own silverware and some seasonings – all for dishes that aren’t exactly appetizing namely pig head jelly, dried caterpillars cow intestines, and sausage juice. It will turn your stomach so make sure you’re not snacking on anything before watching this.

In this clip, Steven Tyler and Corden go back and forth and there is just one question Steven can’t answer. We already know he would never ever rat out his bandmates in Aerosmith. He’s always treated them like family, they’re all brothers.

Anyway, he answered all the other ones with no problem – even how much he has spent on drugs over the years. In case you’re wondering, it’s $2 million! And he even added, “I snorted half of Peru.” Are you even surprised, though? LOL. You gotta hand it to Steven – he owns up to his mistakes and he’s been very vocal about his past including his drug use. He’s never shied away from talking about it.

Corden also asked if he’s ever hit on any of his daughter’s famous friends. *drum roll please* Of course he has, duh! And Corden referred to Steven as his “best guest ever” and we couldn’t agree more. He’s always game for anything and wouldn’t back down when it comes to certain challenges like eating horrible foods. Plus, he’s fun to chat with – no boring talk with this guy!