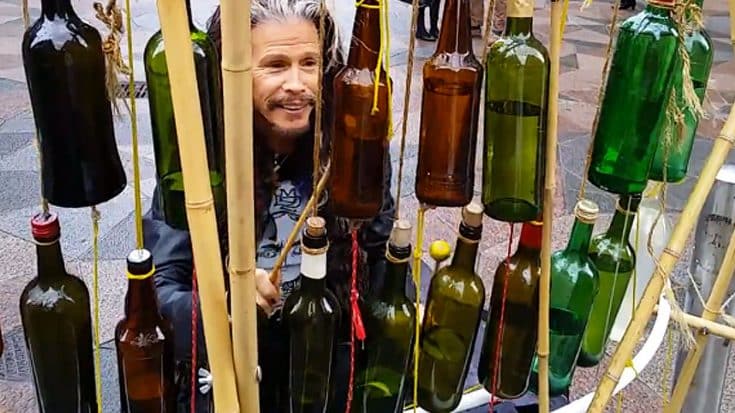 Aerosmith fans know two things about Steven Tyler: he has a great sense of humor, and he’s not afraid to use it! Fans on the streets of Helsinki, Finland were treated to this when Steven sat down at a street musician’s homemade glass-bottle xylophone and began to jam a surprisingly good rendition of ‘Dream On’. Why don’t these things happen when I’m cruising through my neighborhood?

Tyler played a glass-bottle xylophone; a contraption made of bamboo, rope and some 20 wine bottles, which belongs to Russian street musician Fedor Grigorev, who regularly performs in the center of Helsinki.

Guys, I don’t know what was more fun to watch – Steven jamming on glass bottles, or the huge smile and occasional glee filled giggles he let out in between notes! While Steven surely isn’t quitting his day job to become a street performer, this was definitely a once in a lifetime kind of performance that we wish we’d been there to see in person!