Steve Perry Isn’t Coming Back To Journey, And This Innocent Action Proves It Once And For All 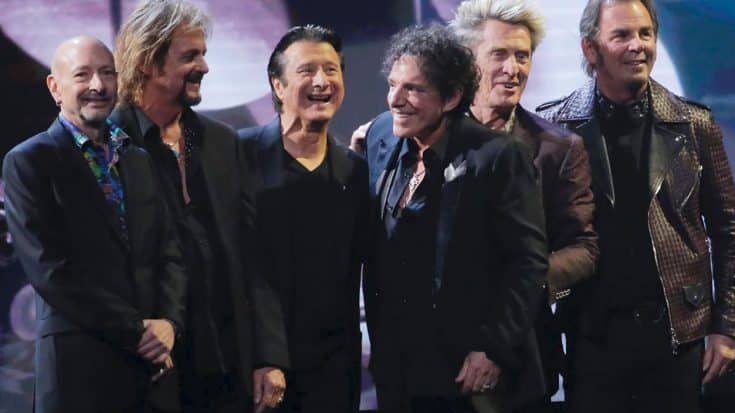 Journey Drummer Points Out What We All Seemed To Miss

Steve Perry’s appearance at last month’s Rock and Roll Hall of Fame induction ceremony was a rollercoaster ride of emotions from start to finish as fans and bandmates alike wondered if the reclusive 68-year-old singer would actually be there for Journey’s big moment. Happily, he not only appeared with his bandmates but seemed overjoyed to do so, embracing his old friends and delivering a winning acceptance speech that left the crowd cheering and his bandmates tearing up.

While Perry ultimately decided against performing with Journey, he graciously ceded the honor to current Journey frontman Arnel Pineda, even taking a moment during his speech to warmly acknowledge the singer – an innocent and highly symbolic action that drummer Steve Smith says was Perry’s way of finally “passing the torch”.

“I thought he gave a beautiful speech, thanking the band, the management and the fans. And also he acknowledged Arnel, which was really a beautiful moment. It really makes it clear that he’s passing the torch to Arnel.

He’s the lead singer in Journey and he’s doing an amazing job. He’s a tremendous singer and a really compelling frontman.”

Pineda, now in his 10th year as Journey’s frontman, has been a controversial choice in the eyes of fans who insist that Steve Perry is the only one capable of singing the songs they love. His endorsement by Perry at the Rock and Roll Hall of Fame induction ceremony and Perry’s outright refusal to perform likely won’t do much to sway their opinions, but hopefully the combination of the two is enough to open the door for Pineda to be respected for his contributions and dedication to the band his hero loved so much.