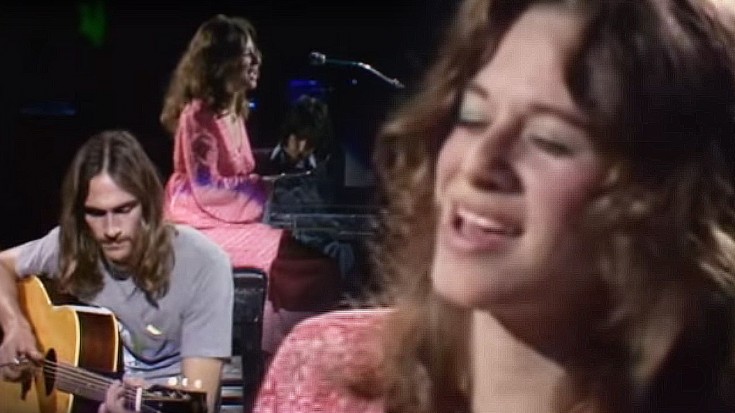 You’ll Want To Stay In One Place For This One!

Carole King is hailed as the most successful female songwriter of the 20th century – I mean after all, she did pen 118 of Billboard’s Hot 100 hits between 1955 and 1999, with the help of ex-husband Gerry Goffin. When she wasn’t writing hit songs for The Shirelles, Bobby Vee – even The Monkees, Carole enjoyed a wildly successful career as a singer, achieving critical acclaim with her 1971 album Tapestry and its shining star, ‘So Far Away’.

Written about the emotional and physical distance between two lovers, Carole enlisted the help of James Taylor for ‘So Far Away,’ even bringing him along for this iconic 1971 performance – and the two of them are absolutely breathtaking together!

Fun Fact: Carole King’s Tapestry is one of the best selling albums of all time with over 25 million copies sold since 1971.

While James softly strums away at the song’s melody, Carole sits above him at her piano delivering one of the most fantastic vocal performances of her career – not bad considering that for years, her stage fright kept her from touring or making live appearances. Vocally, King’s never been much of a belter, her voice taking on a breathy yet soulful quality that through songs like ‘So Far Away’ has had the power to make us cry, think, and turn inward for deep self-reflection over the course of a career that’s spanned nearly 6 decades. It’s nothing short of magic when Carole King opens her mouth and begins to sing, and this performance is no exception!