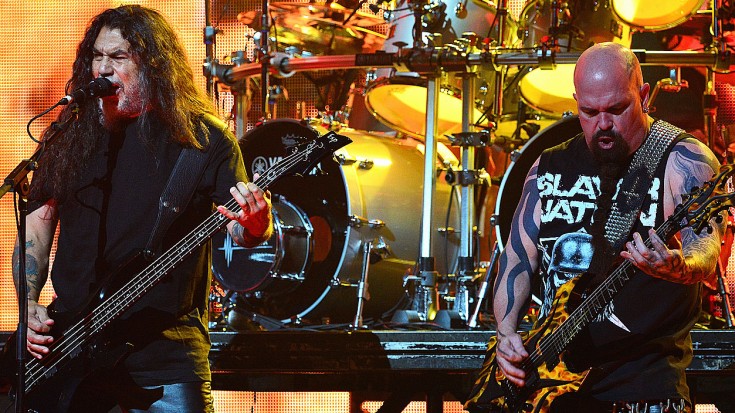 Heavy metal giants jamming a Lynyrd Skynyrd classic to warm up before a show? Now we’ve seen everything! Last spring, fans of thrash metal giants Slayer and Testament saw members of both bands get together before a show in San Francisco for a little pre-show jam session that included a heavy take on Lynyrd Skynyrd’s 1973 classic “Free Bird” – and we’re not quite sure how to feel about it. Slayer singer and bassist Tom Araya took the lead on vocals that night, taking a softer approach to singing than the usual growls and screams heard on a Slayer original, while guitarists Gary Holt and Alex Skolnick shared guitar duties and drummer Paul Bostaph held the whole thing together from behind his kit.

While this take on “Free Bird” is…different, it’s worth noting that classic bands like Lynyrd Skynyrd transcend all genres and barriers – in fact, judging by the killer extended guitar battle between Holt and Skolnick, I’d be willing to guess that much like us, these guitar slingers grew up heavily influenced and fiercely inspired by Allen Collins and Gary Rossington! Check it out in the footage below and let us know what you think!