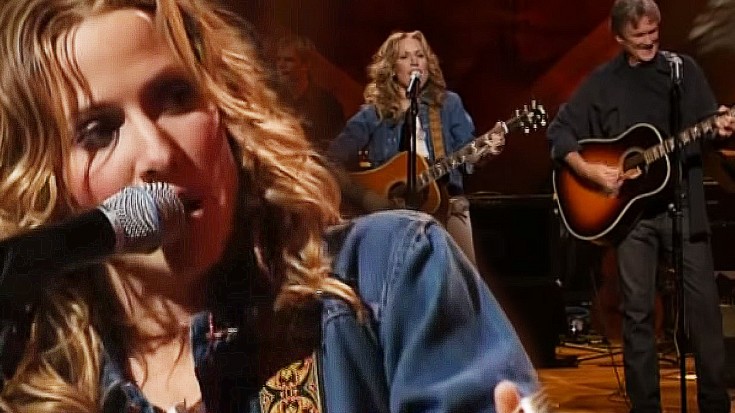 Freedom’s Just Another Word For Nothing Left To Lose

Written in 1969 for singer Roger Miller, Kris Kristofferson’s ‘Me And Bobby McGee’ became embedded in our collective conscious when Janis Joplin covered it shortly before her death in 1970. It’s the story of two drifters – the narrator and Bobby McGee, and while it wasn’t written exclusively for Janis, it’s one that Kris says he’ll always associate with the late songstress.

This performance features Kris with his very special guest Sheryl Crow performing ‘Me And Bobby McGee’, and while it lacks the soul that Janis brought to the table, there’s something incredibly honest about it that sells the performance.

Fun Fact: Janis Joplin’s rendition of ‘Me And Bobby McGee’ was the second posthumous number-one single in U.S. chart history after ‘(Sittin’ On) The Dock of the Bay’ by Otis Redding.

Kris, as always, is happy to kind of blend in with the background, providing backing vocals to Crow who absolutely shines in their rendition, making for a performance that Janis Joplin would have absolutely loved. It’s got more of a country feel than we’re used to, but it’s so incredibly refreshing to hear Sheryl and Kris’ unique take on this old classic!

+ Me And Bobby McGee lyrics +

Busted flat in Baton Rouge, headin’ for the trains,
Feelin’ nearly faded as my jeans.
Bobby thumbed a diesel down just before it rained,
Took us all the way to New Orleans.
Took my harpoon out of my dirty red bandana
And was blowin’ sad while Bobby sang the blues,
With them windshield wipers slappin’ time and
Bobby clappin’ hands we finally sang up every song
That driver knew.

Freedom’s just another word for nothin’ left to lose,
And nothin’ ain’t worth nothin’ but it’s free,
Feelin’ good was easy, Lord, when Bobby sang the blues,
And buddy, that was good enough for me,
Good enough for me and my Bobby McGee.

From the coalmines of Kentucky to the California sun,
Bobby shared the secrets of my soul,
Standin’ right beside me through everythin’ I done,
And every night she kept me from the cold.
Then somewhere near Salinas, Lord, I let her slip away,
She was lookin’ for the home I hope she’ll find,
Well I’d trade all my tomorrows for a single yesterday,
Holdin’ Bobby’s body close to mine.