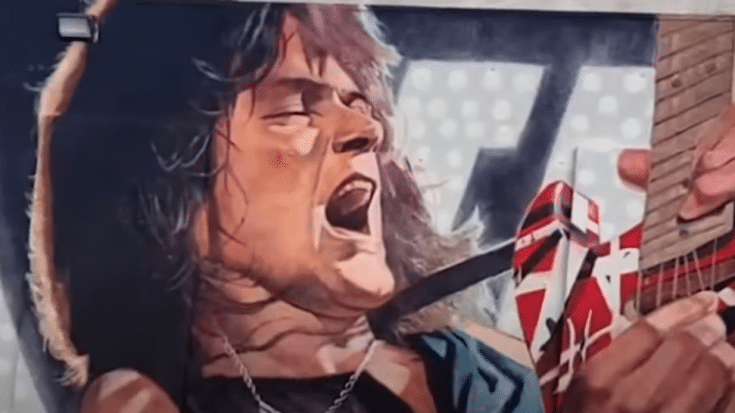 A massive Eddie Van Halen mural titled “Long Live the King” was unveiled Wednesday, January 26 on what would have been the guitar legend’s 67th birthday.

The tribute was created by acclaimed artist Robert Vargas in collaboration with Guitar Center and located in Sunset Strip in Hollywood, California.

The 17-by-105-foot portrait became part of an augmented reality experience that animates the artwork as if the painting’s subject is moving. Through the graphic engineering of The AR Firm, on-site spectators could hold their smartphones up to the art to see the painted EVH’s head bobbing and shredding his signature “Frankenstrat” guitar.

In a statement, Vargas said:

“I wanted to capture the essence of Eddie in the moment. In his creative spirit, when [Van Halen] was at the height of their powers. Just the mighty Van Halen ruling the world and setting it on fire.”

The late rocker died on October 6, 2020 after a long battle with throat cancer.

“As soon as the news hit of his passing, I knew I had to do something creative to memorialize him, and Guitar Center was the obvious venue. Right here on the Sunset Strip, where the band made their bones — I can’t think of a better place for this tribute to him, and I thank Guitar Center for giving me the canvas to share it with the world.”

Vargas finished the artwork in a “completely free-hand [with] all brush work, no grids, no projections and no stencils” style in just about 12 days. In an interview with People, he said:

“I feel exhilarated. It’s a triumph. Creating the mural for Eddie Van Halen was a labor of love. I was able to not only express my admiration and appreciation for him, but also share it with fans along the way. To have such global support for this mural was really rewarding. In the end, I think it was an incredible day.”

Vargas had encountered the iconic artist prior to his death. He recalled:

“To have had a connection and conversation with him about the creative process and where it comes from, although he did something very creatively different than what I do, there’s something that intersects creatively even though it was a different medium.”

“[Eddie] got to see me draw and was totally into it. To connect on that level, and full circle connect and come back through my creative process to create something that celebrates him and his creative process, and share it with the world — this just means everything because it really felt like a dialogue with him, one last time, right there on the wall while I was creating it.”

“Eddie was one of my creative heroes. When I was young, the debut Van Halen record was the first album I ever owned. He influenced me over the years in so many different ways.”

In honor of @eddievanhalen's birthday, we unveiled an incredible tribute by artist @TheRobertVargas today at GC Hollywood. This mural celebrates the passion and virtuosity of Eddie's playing that has and will continue to inspire generations of musicians. #eddievanhalen pic.twitter.com/DUe0ZxdMfS