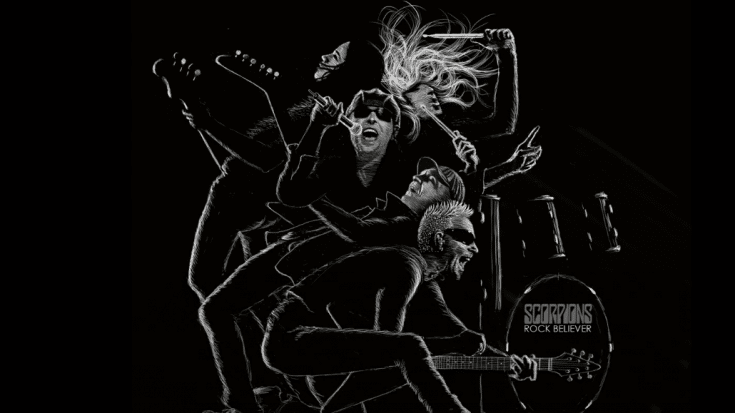 German rock legends Scorpions have released their new single “Rock Believer” which is also the title track of the band’s 19th studio album that will be out on February 25.

Interestingly, the single’s cover art was designed by Klaus Voormann.

In a recent interview with Chile’s Radio Futuro, Meine said about “Rock Believer”:

“Well, you can expect an album that is dedicated to all the rock believers in the world. And we’re very excited after all these years. We thought, when you think about all the touring we did the last 10 years, after the release of ‘Return To Forever’ in 2015, the time was right to go back into the studio, to write new material, to write new songs and check out if the creativity is still working. The big aim was, the goal was to make a rock album — to make an album with lots of attitude, power and focus on the good old times and really enjoy the music and have some fun with the music. And that feels really good.”

“Look, we are around the world since 50 years or more. And when somebody can say he’s a rock believer, then this is us. And of course, we meet our rock believers in front of us, our audience.”

“So many people said rock is dead. It’s not dead,” he continued. “It’s always coming back — sometimes, okay, more stronger [or] less strong — but in the end, it’s great to play around the world in over 80 countries we’ve played so far, and all rock believers. It was always great to share the music with them together and be in connection with them. I mean, that’s so amazing and so fantastic, that we are very happy to come out with a new album. And yeah, let’s see what’s happening.”

“Over the years, we’ve heard people say lots of times that rock is dead. But there are still millions of rock believers out there all over the world that prove them wrong. Our fans are the best in the world. We’ll see you someday somewhere out there, because we’re rock believers, just like you.”

“The album was written and recorded in the SCORPIONS DNA with core Schenker/Meine compositions. We recorded the album as a band live in one room, like we did in the ’80s.”