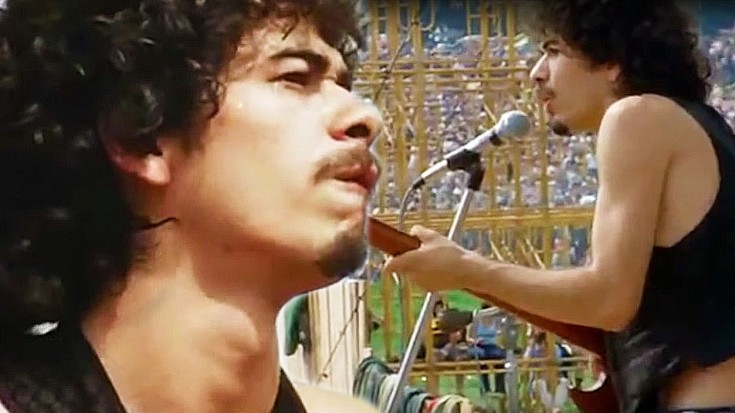 “We Thought We Had The Entire Day To Sober Up…”

Few bands can appear at a festival like Woodstock without a major album backing them and still become an overnight sensation, but with a then 23-year old Carlos Santana at the helm, Santana did just that. Their rendition of ‘Evil Ways’ – a cover of the 1967 jazz tune written by Sonny Henry, put the band on the map with its jazzy fusion of Latin rock and psychedelia and effectively made Santana a major player in the rock world; this performance alone was the catalyst for the band’s wildly successful debut album!

If Carlos Santana’s blistering guitar solo and the impromptu jam session that became ‘Evil Ways’ are what Santana could do while under the influence, then it’s no surprise that every performance thereafter set the bar exponentially higher for this San Francisco band.

Fun Fact: The entire band was high during this performance! They’d been doing acid all day, assuming they had the entire day to sober up before their performance when they were suddenly thrown onstage, with Carlos Santana hallucinating that his guitar was actually a live snake.

Once the final note of ‘Evil Ways’ rang out, the damage was done – everyone was buzzing about the band with the unbelievable guitarist that gave fellow Woodstock alumni Jimi Hendrix a run for his money! As far as performances go, this is Santana’s absolute best and the one that’ll be used for generations to come as a prime example of what outstanding musicianship looks like.

When I come home… baby
My house is dark and my pots are cold
You’re hanging eround… baby
With Jean and Joan and a who knows who
I’m getting tired of waiting and fooling around
I’ll find somebody, who won’t make me feel like a clown
This can’t go on…
Lord knows you got to change