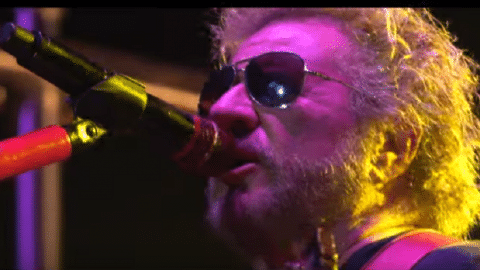 Megadeth will be releasing their newest album The Sick, the Dying, and the Dead! One of the highlights of the upcoming LP includes an appearance by Sammy Hagar, who sings on a cover of his own song, “This Planet’s on Fire.”

In a recent interview, Megadeth frontman, Dave Mustaine, shared his longstanding admiration for Hagar and explained how he was able to convince him to perform on the upcoming album. Mustaine said:

“A lot of people didn’t know Sammy before he did his time in Van Halen. I know him from back when he played in Montrose and, after that, in his solo career. I never really was convinced with the Van Halen tracks because I’d heard Sammy sing on Montrose, and that man can sing … oh, my God. He was one of my favorite singers, forever and ever. ‘I Got the Fire’ is one of my favorite Montrose songs. It’s such a heavy song; even Iron Maiden covered it. I thought, ‘Wouldn’t it be great to do ‘This Planet’s on Fire’ by Sammy?'”

He then asked if Hagar might be willing to supply more than just vocals. Hagar said:

“[but] I ain’t playing guitar because I heard you two shredders and you just leave the stuff like it is.”

“I was really flattered because I think Sammy’s a great guitar player.”

The song originally appeared on Hagar’s self-produced 1979 album, Street Machine. He also revealed that he’s planning an album called Crazy Times that is possible to be released this year. Meanwhile, Megadeth’s new LP will be arriving on September 2 this year.