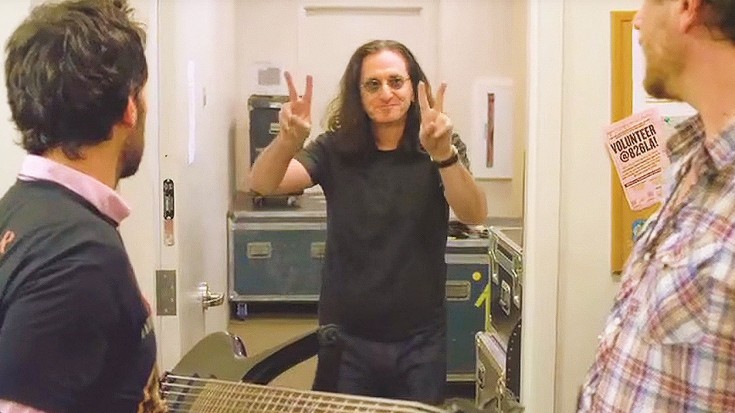 While filming their 2009 comedy I Love You Man, actors Paul Rudd and Jason Segel stopped by Rush’s Time Machine Tour to film a hilarious comedy sketch with the band. In the sketch, which was produced by Funny or Die, Rudd and Segel play their characters from the movie: Peter and Sydney. The two characters are huge fans of the Canadian trio,  and make references to them all throughout the movie, and even jam along to a few of their tunes.

The sketch follows Peter and Sydney crashing Rush’s green room post-concert. When the band shows up to unwind things get a bit awkward, but also hilarious. The duo can’t contain themselves, Peter pokes fun at Geddy Lee’s singing in “Tom Sawyer,” and Sydney tries to convince Neil Peart that he pronounces his own last name wrong. It’s a funny sketch that shows a different side to the otherwise serious Rush.

Check out the sketch below and always remember: never steal Neil Peart’s sandwich.