Rock & Metal Have No Place At The Grammys 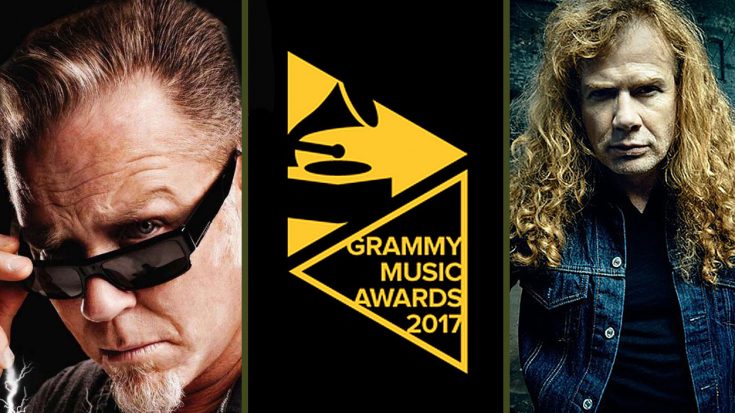 The Truth – The Sad Truth

The Grammys and rock/metal music have always has an interesting relationship. A relationship that quite frankly is darn near non existent. For years, The Grammys have been accused of purposefully snubbing hard rock and heavy metal acts at their award ceremonies, and this year’s Grammys may have just proven that accusation right.

In the eyes of many mainstream music fans, hard rock and heavy metal have been the redhead step children amongst other types of music. While they are undeniably some of the biggest contributors to the world of music, they’re often not given the recognition they deserve, not just by The Grammys, but by several other music organizations. This has been going on for years, but this year’s Grammy awards show was the final nail in the coffin.

If you’ve seen this year’s Grammys, then you’ll have already seen a couple of things. One of them being the now infamous Metallica/Lady Gaga performance, but I actually don’t want to talk too much about this moment. To sum it up, James Hetfield’s mic somehow got unplugged and it pretty much ruined the entire performance. While that’s a shame, it’s a technical difficulty that can’t necessarily be blamed on The Grammys. What I want to focus on right now is actually Megadeth.

Incase you missed it, after being snubbed 12 times by The Grammys, Megadeth finally won a Grammy for best metal performance for their song Dystopia. This award is long overdue and it brings me joy to see that this band has finally given this honor, but here’s where things get insulting. As Megadeth make their way to the stage, the house band decides to play Master Of Puppets by Metallica. Not only is this not a Megadeth song, it is a song by Metallica, a band which Megadeth frontman Dave Mustaine has a notorious history with. Anyone who knows even the smallest details of the history between Dave Mustaine and Metallica would know that that is one of the most insulting things you could possibly do. Was it really too much trouble for the band to do a little research and try to find a song that is played by Megadeth!?! Hell, one of Megadeth’s most iconic songs is a song called Symphony Of Destruction. If the house band played that song, not only would it have been the right song to play, but it’s also a WAY easier song to cover than Master Of Puppets!

Why is the detail of the wrong song being played so important here? Well, it’s a clear sign of just how much The Grammys don’t pay attention to detail towards the hard rock and heavy metal categories. It’s painfully obvious that we’re an afterthought to them and that they just don’t care enough about us. If a detail THAT obvious can be overlooked, they clearly don’t pay any mind to us. They wouldn’t DARE make that mistake during Adele’s entrance would they? I’m not saying Adele doesn’t deserve that kind of treatment, she totally does, but the same thought and care should be shown to ALL other acts, especially a band that has been writing, recording, and performing iconic metal music for decades.

Unfortunately, this mistreatment is nothing new. Hell, it took AC/DC 37 years to finally win a Grammy. There are countless examples examples of The Grammys not giving a single thought to the hard rock and heavy metal acts that have been paving the way for musicians of all walks of life.

Going back to the infamous Metallica/Lady Gaga performance. Again, James Hetfield’s mic going out is not necessarily an issue that we can blame The Grammys for. Where I’m outraged regarding this performance is the fact that when Laverne Cox went up to introduce both Metallica and Lady Gaga, she didn’t even mention Metallica in her damn intro! C’mon man! She followed up with this apologetic tweet.

I am so sorry to #Metallica and all their fans. I am told I didn't say their names during the intro. Love you Metallica. You Rock. #Grammys

In conclusion, I’d like to say that The Grammys will always be a successful annual award show and that regardless of what I say, they will always be a HUGE part of music history. However, so will hard rock and heavy metal music. I only wish that the two could coexist.