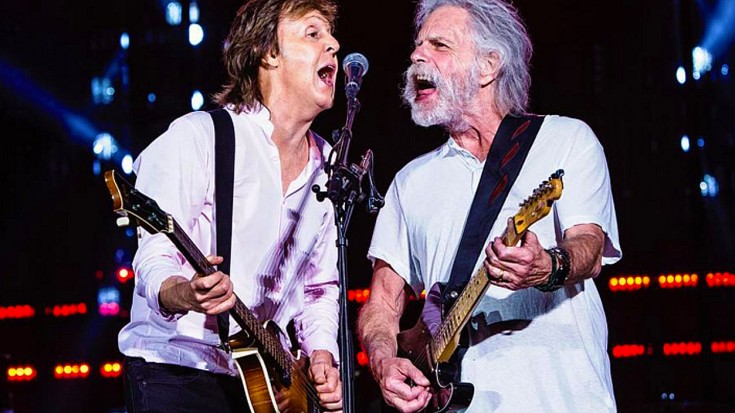 Fenway Park Will Never Be The Same Again!

As promised, Paul McCartney’s One On One Tour has been a non-stop whirlwind of fun mixed with a healthy dose of good old fashioned classic rock. From Beatles classics that haven’t seen the light of day in half a century to electrifying tributes to Prince from the comfort of The Purple One’s hometown, Paul’s quest for rock and roll world domination is moving along beautifully – and on Sunday night, he really upped the stakes with the addition of another rock legend who happened to be in the neighborhood with his own band.

Fun Fact: “Helter Skelter” is considered by music historians as a key influence in the early development of heavy metal.

Boston’s Fenway Park was treated to the surprise of a lifetime when Paul, joined by Grateful Dead co-founder Bob Weir launched into an explosive take on The Beatles’ 1968 classic “Helter Skelter,” complete with special guest and football star-turned-backup dancer Rob Gronkowski of the New England Patriots rocking the air guitar right behind them.

As noted by Consequence of Sound, Sunday night’s rock show at Fenway Park marked the first time a member of The Beatles shared the stage with a member of the Grateful Dead, and after watching it a few times, we’re left wondering – what took so long?! These two are absolutely amazing together! Check it out in the video below; whether you’re a die hard Beatles fan or a devoted DeadHead, the chance to see two of rock’s most loved legends is too great to pass up!